The Muse has set the Tivo and recorded every juicy minute (when I’ll get a sec to watch it is anyone’s guess!)!

Don’t get me wrong I’ve been enjoying Ghost Hunters International but I was missing Tango in a major way! The Muse crushes on Tango in a rather strange way! What’s not the like? He stutters slightly, he’s twitchy as hell, and he looks like he might fall over if I blow on him but hey he hunts ghosts that’s enough for the Muse! I met Tango at a geeky Fangoria style convention about a year and a half ago and can I tell you he’s as neurotic in real life as he is on the telly but still damn cute! Sadly, I don’t have pics as I was being as neurotic as he is when I met him! I may have even developed some sorta stutter! Imagine if I met a real celebrity? I’d fall over and have convulsions! 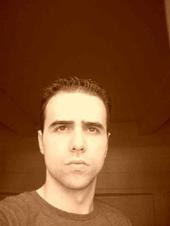 So an anonymous poster had posted in my Lestat blog and said that “she loves the random geeky bits…” I can’t begin to tell you how properly chuffed I was when I read that! I got that warm, fuzzy feeling in the pit of my stomach and I felt like I had accomplished something for the geeks of the world! YES I’ve evolved and become not only your makeup guru but your geek god! I rock!

Seriously I was super proper happy that she was enjoying content that was geeky in nature minus the cosmetic side.

Thus this particular post came alive after I got her comment because I sincerely want to share the joys of the Ghost Hunters with possible fans in Cosmetic Land.

Granted Ghost Hunters has gone from somewhat scary to “oh my god this is so fake” to “wow Jason looks strange being bald and all and having a beard” to “warning: Purely for entertainment purposes only”.

I’m saddened by the fact that Ghost Hunters has taken the commercial path and choose endorsement over science. I’m not a big believer in ghosts in all honesty (I am a believer in aliens if that counts?!) but during the first season of Ghost Hunters they had me slightly believing that maybe just maybe it was true. But it slowly went downhill soon after and I was unable to take much of it seriously. Over the course of it’s run I’d say it was from being sorta believable to being hopelessly full of bologna!

Anyway even if it is for entertainment purposes I still enjoy it in a major way! I’m actually quite saddened the team has dwindled down so much and all the awesome people I enjoyed laughing at (Brian anyone?) are long gone.

However, at least I get to see Brian and Barry make fools of themselves in England, Scotland, Etc…Seriously what’s better then Brian in England running around like an idiot!

The team has since added that Kris or Chris chick who I find deeply annoying! The original cast is pretty much null and Jason, Grant, Steve, and Tango are all that remains but I get my kicks where I can and enjoy it even minus half the originals.

Personally the Muse wants a show named Ghost Hunters Dave Tango Style but I doubt it’ll happen but if you want to start a petition give a yell!