There is something so terribly appealing about puffing my entire body down with a big slab of Bobbi Brown Shimmer Brick! And lookiee here now I can fulfill that need with the brand new Neiman Marcus Exclusive Bobbi Brown Exclusive Shimmer Brick for Body & All Over Body Brush! 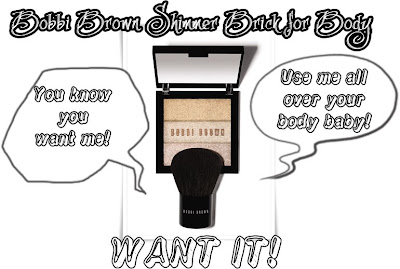 Available exclusively at Neiman Marcus the Bobbi Brown Shimmer Brick for Body & All Over Body Brush is all about creating a bit of shimmering dazzle on legs, arms, decollete, or anywhere else you’re wanting to shimmer yourself down. Mind you this kind of treatment doesn’t come cheap! The palette is $75 USD and the brush, yes it’s sold separately, is $85 USD! Whoa.

But of course this doesn’t prevent me from wanting it any less. The Muse likes the idea of sitting around and brushing shimmer everywhere and anywhere but of course she does think a bunch of craft glitter in a bucket, dumped over her head might be a bit cheaper but it doesn’t have Bobbi’s name on it now does it?

Yes, indeed, I wants it, rather badly.