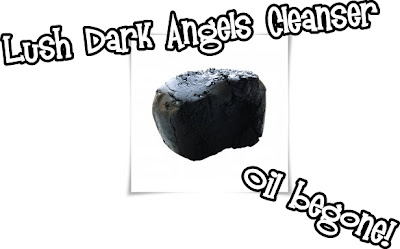 The Muse has been so busy lately she hasn’t had a visit or a stop by on the Lush UK forum in a long, long time. That being said it means she isn’t as updated on what is being released from Lush. Ugh how remiss of her!

Well….a little late to this ball game but better later than never. Allow me to introduce you to Lush’s latest skincare gem entitled Dark Angels Cleanser.

Jump ahead for it!
I happen to be a fan of Lush Coal Face so I’m quite curious about Lush Dark Angels Cleanser. Although I do so admit that they appear to be quite similar?

Dark Angels is supposedly a powerful cleanser designed for younger, oily skin, and darker skin. I find it interesting that Lush designed a cleanser meant for darker skin. I’m wondering what that entails and I’m looking forward to hearing reviews from anyone with a darker tone. It’s supposedly a cleansing roll which could mean it’s not solid and more along the lines of Angels on Bare Skin where you are breaking off pieces to use. The base of the product is Rhassoul mud which is purchased directly from mines in Morocco’s Atlas Mountains (yes I know sounds exotic but knowing Lush’s environmental stance I imagine it’s very true). It also contains charcoal which absorbs oil and scrubs skin clean. Rosewood and sandalwood essential oils keep skin smooth.

It doesn’t honestly sound exactly like Lush Coal Face in formula or texture but the charcoal definitely hints at the fact it could likely be quite similar in results. I’m quite curious. I think I may indulge. I’m neither young nor oily but anything Lush skin related always tops my lists. It’s Summer so I imagine my forehead can use a good scrub down to keep it from being oily. The worst it could do is dry me out.