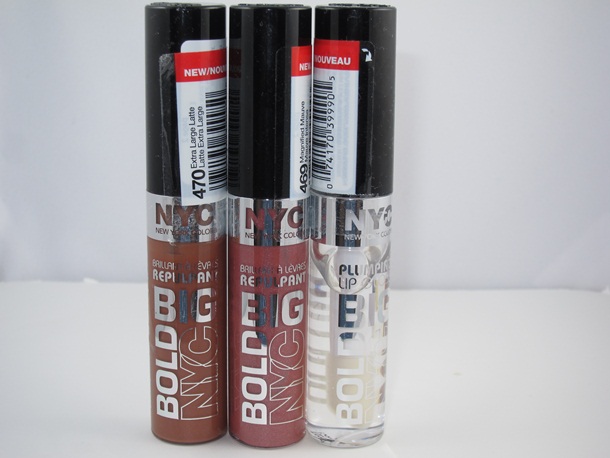 NYC New York Color Cosmetics has launched a range of Big Bold Plumping Lipgloss for Spring 2013. These jumbo glosses are on pair with Hard Candy Glossaholic housing a whooping 0.39 oz of gloss for a mere $3.99 each!

Available in twelve shades the price and color selection definitely gives Hard Candy a run for the money.

Are they as good?

This a lot of gloss for the price so when I saw them at CVS recently I quickly grabbed up a few to try knowing that I’d return for all the shades if I loved them.

You might be familiar with massive glosses like these as a few brands have put them out over the last two years like MAC, Hard Candy, and Flirt just to name a few.

Each gloss has a massive sponge applicator about three times the size of a normal one (see comparisons below). This applicator may seem clumsy but actually works really well to get gloss onto lips in a single stroke. These particularly glosses have a nice opaque finish…well…perhaps not fully opaque but they have a good deal of tint behind them for a gloss although color isn’t exactly true to tube finish. The two shades I tried (I got a clear one as well) didn’t quite have the vibrancy on my lips that they did in the tube, they appeared a little duller, but none the less they didn’t lack pigment that much is true.

I’m actually not a fan of the gloss on a whole and can only really rave the pigment. The gloss has a gooey texture which comes out of the tube in thicker ropes. Be careful when removing the applicator as ropes of gloss come along for the ride….do so slowly to avoid this.

I think what disappointed me most about the gloss is it didn’t apply as thickly as the formula might imply at first. I expected super shiny, thick gloss but it actually thins out on my lips and has a drier texture without a ton of shine or glossiness. Darn! I was so hoping for more of a mirror-like shine. I’m not terribly keen on the taste either…I haven’t quite figured out what sort of flavor they have…it’s sorta modeling clay like?! with vanilla? They wear quite comfortably on my lips and lack a tacky, sticky feel. They give lips a nice plush look but not necessarily the 50% pouting effect that NYC promises. Although a plumping gloss they don’t sting in the least, I believe the formula is dependent on the thickness to create the pouting effect. The gloss does like to migrate a little around my lip line so a little lipliner is in order.

Overall, I wasn’t too impressed with them….but they aren’t entirely bad either. Perhaps on sale they might be worth picking up a shade or two. I wouldn’t write them completely off but I do prefer Hard Candy’s version in comparison however, Hard Candy sadly lacks pigment though!