Sweet! Etude House doesn’t really do massive palettes like this and outside of the Etude House Aloha Tropical Eyeshadow released in 2011 with the Aloha Collection (this included 48 eyeshadows! The biggest palette Etude House has ever done) which sold out very fast there hasn’t really been a palette bigger than a five pan! However, this past Fall Etude House brought out the Flowering Eyes Palette, a first for the brand, that include ten shades of rosy eyeshadow. And bless be this Winter we get these new Etude House Play Colour Eyes Palettes that also include ten shadows. It’s rather novel to see Etude House doing these bigger eyeshadow palettes. 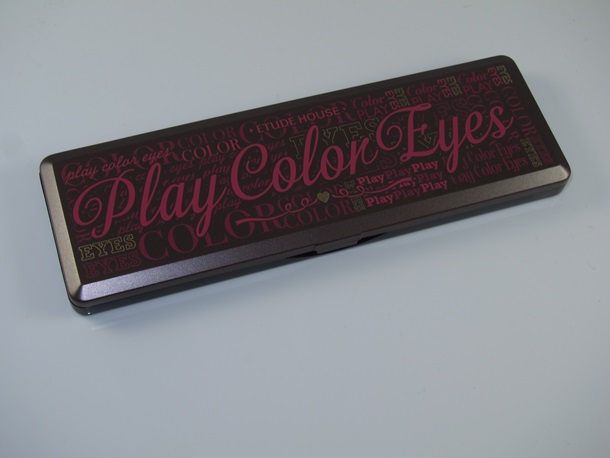 I have both palettes to review for you but today I’ll be featuring the Etude House Play Colour Eyes Eyeshadow Palette in So Chic Play. The palette is a slim line compact featuring a full size mirror, two dual sided applicators, and ten eyeshadows in a variety of sparkle and matte finishes. This is split right down the middle with five matte shadows and five sparkle shadows. The mattes are a little dense and dry but not chalky and they apply fairly nicely so long as a sponge is use to build color. I had a small issue getting them applied with a regular brush as color was difficult to pick up due to the dense formula. These aren’t exactly silky mattes so a little work is required to apply them but they are worth the effort as they create very nice eye looks. The sparkle shades are basically pressed pigments in my opinion. These have a flaky, chunky consistency that resemble MAC Pigments like Kitschmas. They do have a good deal of fall out and are VERY delicate and prone to break off easily when a brush or sponge applicator is stroked cross them. The texture does have a Bobbi Brown Sparkle Shadow effect because as you press on them the flakier areas start to bind together and get a bit denser which is good because it makes application a little less messy. At first I was worried about these shades as I thought they’d be a bit like Sonia Kashuk Showstoppers Eyeshadow which has sparkle but very little pigment. But they actually do have a bit of color to them and particular look nice when you use the matte shadow first and apply the sparkle on top.

Etude House actually recommends you shade your eyes with a lighter color, line with some of the darker shades, and add a touch of sparkle to complete the look. I actually went a step further and used a lighter shade all over my lid, topped with the sparkly shade, and used a darker color to contrast on the outer V. Colors in the So Chic Palette include:

I used French Kiss all over my lid, Leopard Brown on the outer v of my eye, and topped the look with Sparkling Wine. They have quirks that much is true but I really enjoyed the Etude House Play Color Eyes Palette and think it is worth a haul! They are sadly available for a limited time though so best grab it before they disappear!

You can get them from F2Plus1 on E-bay or at their online shop at beautynetkorea.com for around $15-$20 each.