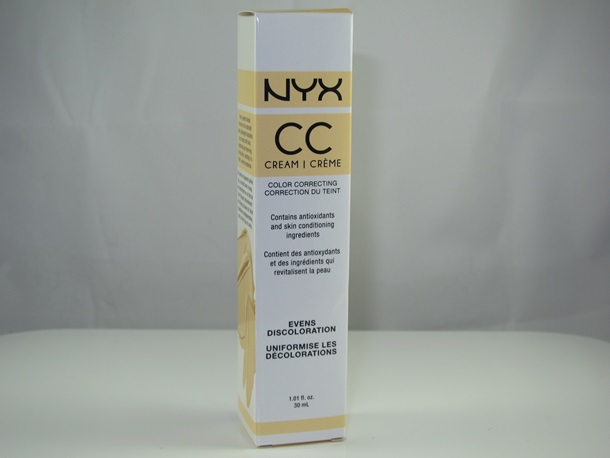 NYX Peach CC Cream ($13.99) is one of three new color correcting CC Creams that launched with the NYX Spring 2015 Collection.

The new NYX CC Cream comes in three shades of Peach, Green, and Lavender. Each shade selection also comes in two of its own color choices of Light Medium and Medium Deep. Unlike traditional color changing Korean CC Creams these actually give you the option of two shades. I waffled back and fourth on NYX Peach CC Cream because after trying it I wasn’t sure I wanted to recommend it. First off, it’s $14 which is inexpensive for NYX and secondly, it’s so very sheer you have to question whether you absolutely need it.

This is a pale nude peach shade which apparently has brightening effects to improve discolorations to give your skin a more even, brightened appearance. It has a very thin texture and absorbs easily into skin leave behind a soft finish that isn’t hydrating, greasy, or oil but more smooth and lightly satiny. It does even out my skin slightly and even brightens it a very little bit but you really have to start hard to see the subtle differences in my skin tone.

If you use Korean CC Creams it’ll definitely prove disappointing as most Korean formulas can act as coverage as well as a corrector so no need to follow up with a BB Cream or foundation after applying. In the case of NYX Peach CC Cream you’ll want more coverage likely so foundation is the next necessary step here. Don’t get me wrong, if you don’t need a ton of coverage you can easily use this as light, natural coverage as it’ll slightly even out skin tone and brighten up skin for a very natural, subtle look. However, most people will want to follow up with foundation and use this to correct or even prime skin prior to foundation. I’d liken it to Bobbi Brown CC Cream as the texture are kinda the same as is the coverage however, Bobbi’s version is obviously way more expensive (and a tiny bit more pigmented).

If you’re looking for a drastic color correcting formula for skin discolorations this might disappoint. It’s not nearly pigmented enough to address major problem areas. If you want something that will lightly correct skin tone so it looks more even and brighter you’ll likely be happy with this formula.

For myself, I’m a little torn. It’s a nice enough product but a little expensive for what it does do which is not a lot…..! The good news? NYX is always on sale at a variety of places such as Ulta so if you can get it on sale it’s worth picking up but at full price….well….you probably can get something that does a better job! And heck at a cheaper price too if you’re going with an Asian brand!