On my rush to get home last week I decided that it would be such a grand idea to stop into Bath and Body Works to pick up the three newest 3 in 1’s!

A little history behind these new 3 in 1’s:

They are a big ripoff of Philosophy’s 3 in 1’s and could………possibly…..be better! You did not hear that from me, if you spread the word you heard it from me…I’ll deny it! I have no shame, I’ll claim you a liar and laugh about how ridiculous you are to spread such a rumour as this!

Now around Christmas 2005, Bath and Body Works introduced three very simple 3 in 1 Shower Gels. They were, as I recall, Eggnog, Hot Chocolate, and Gingerbread. Obviously they went over pretty big because summer rolled around with new 3 in 1’s. Pina Colada, Strawberry Daiquiri, and another, the name of which, escapes me at the moment. After this, quite a few were released with the new seasons….

Now these must have been quite a smashing success because this year they went nuts and released around 12 new scents! They never did anything like this on such a large scale so the variety was quite lovely! Peach, Melon Cooler, Island Coconut, Frosting Forever, Iced Tea, Etc..Etc…

Oh my how naughty! Does this remind you of anything? Talk about shameless copying!

Now my story got off track slightly and I have to somehow pull myself back to the right mind frame! All this variety frazzles my nerves!

As I was saying I decided to pop into Bath and Body Works to purchase three new 3 in 1’s in particular! I had wandered on the website during my work day and noticed that they were $6 during the HUGE Semi-Annual Sale! I was shocked that something they introduced a few short weeks ago was cut in half from it’s original $12 price tag! WOW!

The three newest scents that they had put out were Island Coconut, Sunset Mango, and Beyond Berry! These scents were introduced after the above mentioned ones so I was quite pleased that I’d be nabbing myself a little deal!

I now realize what a conspiracy the $6 price tag is! Heed my warning and you can avoid the drama of Spontaneous Purchasing!

When I entered Bath and Body Works that day the line of people was what borderlines on the absurd really. People holding tight to dozens and dozens of bottles of body sprays,body lotions, etc…. These people were acting like there might very well be a shortage of lotions, shower gels, and body sprays sometime in the near future (Dear oh Dear maybe they knew something I didn’t?!?!?!)! It’s actually very difficult, to hold your head high, walk through the aisles, and avoid bins that are marked $3, $4, $5, etc….

I’ve come to the conclusion that the gimmick of setting the newest 3 in 1 scents at $6 a piece is just to get your little ass in the shop because when you are there you aren’t settling for just those three shower gels! You’re wanting some of everything! Before long you’re running around with the rest of the minions gathering up bottles of lotion that will keep you smooth for the rest of your living days!

I’m happy to report I didn’t give into temptation! I resisted! Bath and Body Works evil little plot to get me in the shop and spend a zillion dollars didn’t work!! I went in, purchased the three bottles I said I would and not a thing more!

Go on, pat me on the back! I deserve it right?

Ahh..the temptation of spontaneous buying weights heavy on my mind and heart but resist I did and came out a stronger person for it!

My Very Small Haul from This Year’s Semi Annual Sale! 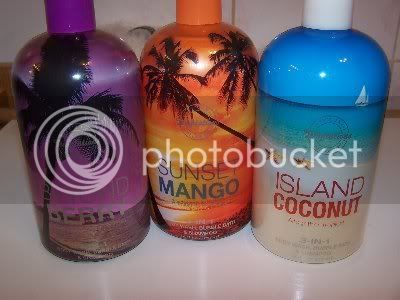