Back in the Summer you might remember me babbling in excitement when Lush introduced it’s Hair Gel line. This is a first for Lush as they normally lean towards other haircare items but never styling agents!

If you happen to be British or an Anglophile then you’ll be familiar with The King of Mods and Goth Juice. 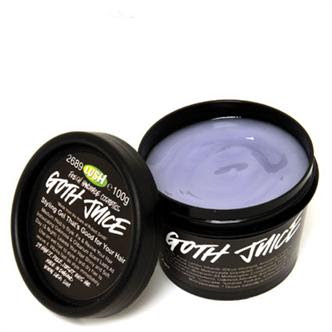 The King of Mods 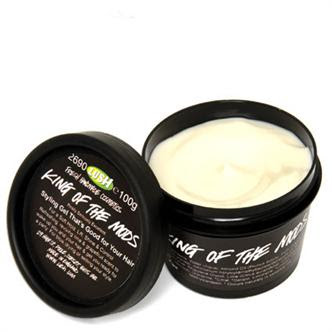 You might wonder who this King of Mods is. Well, it’s now a Hair Gel from Lush but it’s also a reference to the one and only Vince Noir aka Noel Fielding from The Mighty Boosh as for Goth Juice that’s a whole other story! Goth Juice, according to Vince, just happens to be the strongest hair spray known to man which is made out of the tears of Robert Smith (if you don’t know who Robert Smith is we can’t be friends anymore! Serious.). In this case Lush made Goth Juice a hair gel and not a hairspray.

So after that rather long story (You’re lucky it isn’t longer as I can discuss the Mighty Boosh all day long) I want to give the King of Mods and Goth Juice a big go ahead for purchase!

I wandered into Lush this weekend and I sniffed both King of Mods and Goth Juice and promptly fell in love. Sadly, I didn’t get a sec to snatch some up for my very self as I was in a bit of a rush and the Christmas crowd was vast and Herald Square Lush happens to be the size of a closet in an old Victorian house so put together a small store and a crowd and you have an unhappy Muse that’s clamoring to get out as quickly as possible!

But fear not I ordered both Goth Juice and the King of Mods from Lush UK last night and I’ll do a much better review upon using both but at the moment I can give you the low down on the scent!

I fear the name sold me on both as I’m a big Noel Fielding fan (and old enough to actually get the references in The Mighty Boosh) but upon actually getting a chance to sniff these I’m quite more in love than before!

King of Mods reminds me of Ocean Salt a bit. It’s a crisp, citrus scent with lime and grapefruit! It’s quite lovely and fresh smelling!

As for Goth Juice, yes the name was a big seller for me, but the entire idea of a herbal, earthy hair gel wasn’t too appealing but I’m happy to say that Goth Juice is a big YAY for me! It’s purple (Seriously! What color did you expect Robert Smith’s tears to be!??!) and smells alot like Jungle to me. If you use Jungle you’ll know exactly what I’m talking about. It’s a bit more earthy than Jungle but it’s a very nice herbal, earthy green scent that really is quite pleasing to the nose (I’m surprised I like it since I’m more of a fruity/sweet lover! It may just be the name that’s blinding me!).

Overall, both are really gorgeous and I’m eager to see how well they work!

King of Mods, Goth Juice, The Mighty Boosh, Noel Fielding, and Robert Smith are all VERY Muse Approved (I just happened to pop in a Mighty Boosh DVD here at work as I typed this to get into the spirit of the post!)