For the past few years geeks within the US mourn the fact that Brits get a very special Christmas treat on the 25th.

No idea what they get on Christmas Day? That means you aren’t as dorky as the Muse is either that or you’re saying EASTENDERS!!!!!!!!!!!!!

They get a special Christmas episode of Doctor Who on the 25th of December. Damn lucky people. One more reason why the English should rule the Universe.

Since Billie Piper’s sad, sad exit (I’m still crying! I’m actually mourning for the loss of Camille Coduri aka Jackie Tyler more than anything else to be honest! I still say she’d have made a brilliant assistant in all her annoying glory!) from the show we’ve been treated to quite an array of woman traipsing through the Tardis as of late…hell even Catherine Tate and dare I say….Jennifer Saunders (Not as an assistant either my friends! I say no more for fear of ruining the surprise should it happen!).

Well, assistants come and go but the quirk of the Doctor always remains the same thankfully.

And why am I babbling about the good Doctor you might ask?

Yes let’s get to that shall we!

The Muse has scoured the undernet in hopes of locating the Christmas episode (The word on the street is Peter has recorded it for me! You remember Peter don’t you? If you’ve been with the Muse from the start you’ll know who I mean! If not click here and while you’re at it do a search for Peter and you should find a bit of info to appease!)

Well, sadly I haven’t really bothered looking hard enough but the moral of the story is that it’s quite possible that Jared Blandino may have gotten to the very cute Kylie Minogue (I’ve been told he has a special flare for aging the young!).

What.
in the.
World.

I seen the promo images for Voyage of the Damned and I must say they aren’t Kylie’s most flattering! I personally think she’s bloody gorgeous and looking quite suave for her age but whoever did her makeup and hair for the Who episode deserves to be shot down!

Granted the year is 1912, is that the year they said it was good to wash your hair with salad dressing? I can’t recall.

Seriously, her hair is a bird’s nest, rat’s nest, frizz a whizz special or whatever else you choose to call it! She quite looks like she has a wig on (and maybe does! I hope!).

Her makeup is quite ok but it appears they may have run out of concealer for both her and David!

In all seriousness I worship at the feet of David’s alter but god knows he looks much better with a pound of concealer on! I didn’t think anyone could take Tom Baker’s place in my heart as the Doctor but damn if David didn’t. But the sad, sad fact is David is quite pale and freckle laden. Which isn’t a bad thing but I’m so used to seeing the man with a ton of concealer on it’s sometimes shocking to be confronted with his real skin!

And Kylie my god the wrinkles and crow feet are scaring me. Someone hold me.

Did they run out of cash for this episode and couldn’t afford proper make-up artists? And the hair..my god the hair….

Ok so we should take into consideration that this is Doctor Who which means tons of running around after some aliens or creatures and Kylie’s hair probably suffered the consequences during all that action but I will say that Billie Piper never had a bad hair day so why should Kylie?!?!??!

David with his concealer firmly in place! 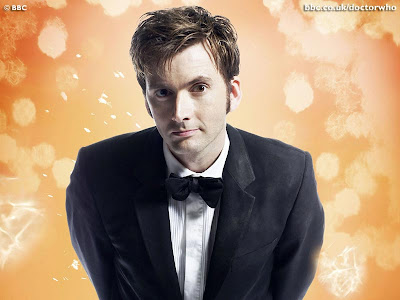 Kylie needs some help here! The hair, my god the hair! Forget the face for now woman! Do something with her hair! King of Mods maybe?! 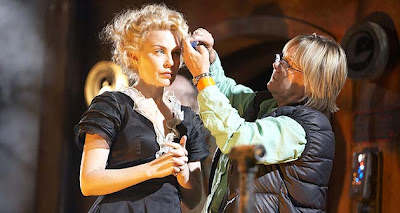 David looking very scary minus his concealer and Kylie looking equally awful! Maybe the airbrush on photoshop was brokes! 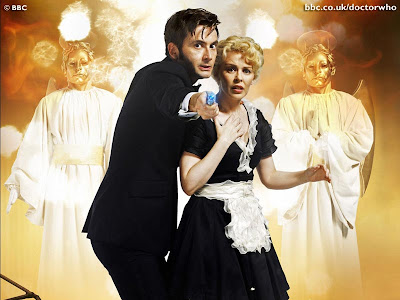 David minus his concealer again! If I was him I’d sue BBC for posting these on the Internetz for all his adoring fans to see! 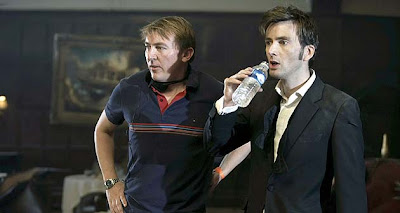 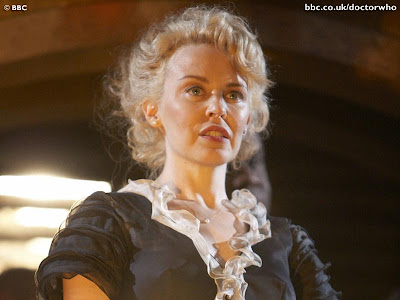 David looks ok thankfully but Kylie has had a better day here! 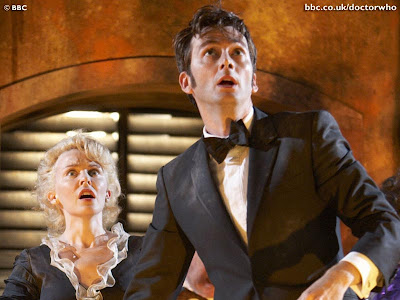 Do click to enlarge some of these because they are seriously scary! Particularly this last one!

Kylie don’t quit your day job love! Thank god Who was a one offer because lord knows it aged you at least 10 years darling!

I apologize in advance for my cruelty but these images just shocked me straight out of my shoes! However, I will say that my schedule is clear if BBC is seeking a new assistant as the Doctor most certainly needs a Muse in the Tardis even if it ages me a a couple of years! I don’t mind, honest, swear, truly! I can live without concealer!

Kylie on a good day: 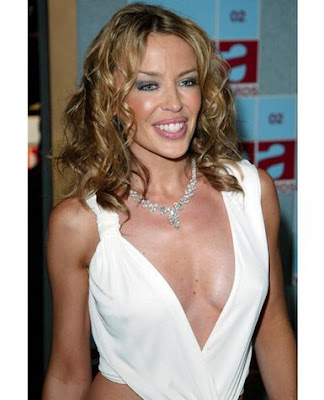 P.S. Lord knows I’ve dropped to my knees in thanks that John Barrowman didn’t decide to show up for this episode! Can you imagine what they’d do to him? I shiver in fear thinking about it!