YAY! Today I got home after a really, really, really, did I mention really? stressful day at work and my Lush UK had arrived! I did a little dance in my hallway and proceeded to lug my big box upstairs to my washroom to rip into it!

Thankfully everything arrived safe and sound as the postal people like to play football with airmail!

If you have no idea what I’m so excited about it you can read my previous post by clicking here for the details and history behind this order!

If you ordered during the UK party your order should be with you this week (Unless you have Retro items in your order! If you do your order may take a tad bit longer!)! I’m vaguely surprised it took this long as normally UK Party orders are pretty quick but I think they got overwhelmed with Lush Retro orders thus the wait time!

I ended up ordering 7 Bottles of Snowcake Shower Gel and a Retro Hatbox for myself! Yes, you read it correctly. FOR MYSELF! No way on God’s green Earth am I sharing this shower gel with anyone! It’s far to fabulous and can only grace my shower stall (the rest will be carefully locked in the beauty vault). 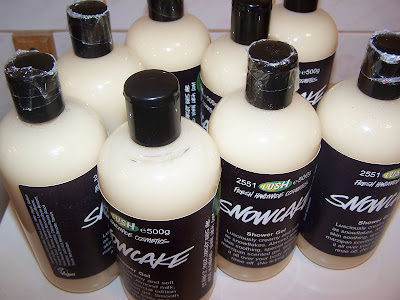 What’s so fab about Snowcake Shower Gel? Go read my ode to Snowcake and you’ll understand the importance of it (Click here for that story).

Snowcake Shower Gel is exactly the same scent as the soap (and Smitten hand cream)! It’s gorgeous! I sampled some by washing my hands with it and it’s super thick, creamy, and smelling of marzipan, almonds, and all good things Lush! I may tip the bottle and pour some into my mouth! When my 7 bottles are gone I’ll mourn it’s lost in a major way! 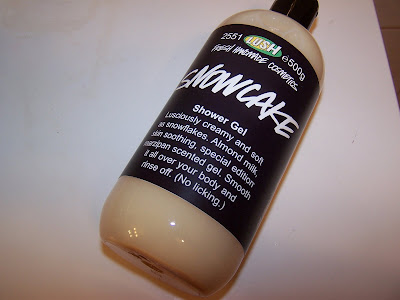 I also got myself a Retro Hatbox which was offered during the party! I can’t begin to say how freaking chuffed I am with the Retro Hatbox. For one thing it was cheap as day old chips and for the other it’s filled with long gone Lush that I truly miss and I’m happy to see back for a rerun! I’ll be savoring all these goodies while they last! I was going to order two of these but at the last minute I decided one would have to do but I regret that now! Oh well!

My GIANT Retro Hatbox waiting for me to open it! 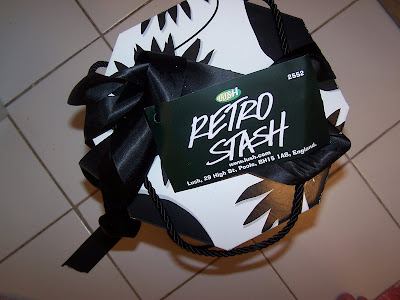 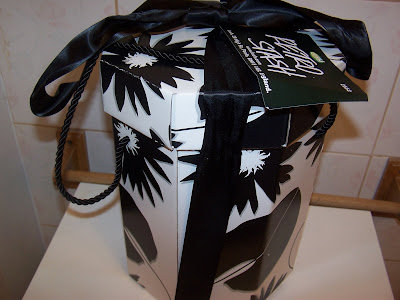 Ribbons off! Time to dive in! 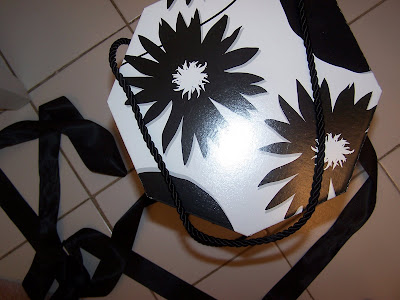 YAY! Time to dig in! 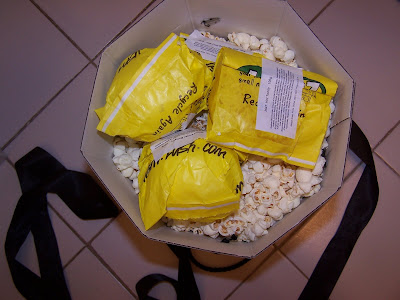 If you’re old hat to Lush you’ll recognize some of the goodies that make a return in this Hatbox! 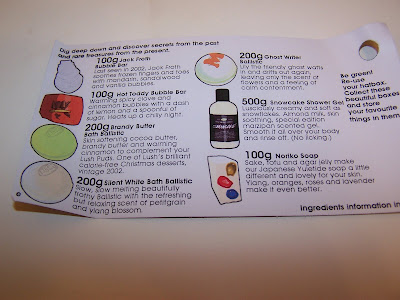 Soooooooooo the hatbox had a Snowcake Shower Gel in it…la da da da da…yup that brings my count up to eight hehe!

It also contained one each of the following items:

Noriko Soap Oh how long it’s been since I seen your delightful self make an appearance! Christmas’s have come and gone since Noriko’s return! A delightful Christmas soap!

Silent White Bath Bomb Another blast from the past but this has been cropping up during other parties so I haven’t been in too much withdrawal for it!

Jack Froth Bath Bomb Sigh….I miss you Jack! Jack hasn’t been around for Christmas in ages!

Brand Butter Bath Bomb Another wonderfully warm bomb that has failed to make an appearance in years! I’m so happy to have it back!

Ghost Writer Bath Bomb This little guy I don’t recall but I’m happy to have him and try it!

And finally a favorite of mine Hot Toddy Bubble Bar Slice which hasn’t been around for quite a while as well and I can’t begin to say how happy it’ll be making a guest starring appearance in my bath tub soon!

The hatbox cost about $60USD or so and was an absolute STEAL! If you nabbed one during the party fantastic! If not you really missed out on something special!

All of the items are packed in a gorgeous reusable hatbox (I use mine to store tarts, bath products, etc…)! 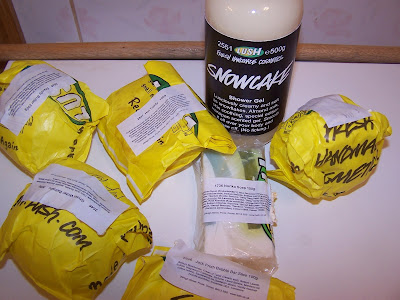 The hatbox was filled with Lush’s new packaging….POPCORN! Lush is always environmentally friendly so popcorn is there way of “going naked”! It keeps all your goodies safe and sound plus you can dump it out and feed it to the birds after! No waste! Yay Lush for being so sensitive to Mother Earth! Click here to check out one of the Muse’s favorite blog’s for more information about packaging (you can also check out Mandy crushing mighty hard on Mark! No comment!)!

POPCORN! The Muse highly suggest NOT eating the popcorn! It’s infused with Lush smell thus making it soapy popcorn! But she does recommend taking it to your local park, outside your yard, or to a duck pond and feeding it to some birds! 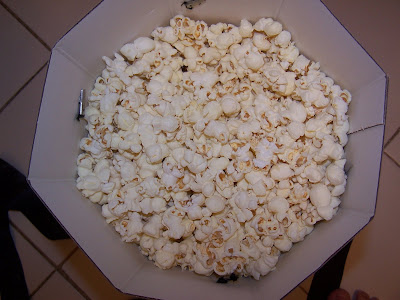 The fine people at Lush UK were kind enough to pack a Lush Times in with my order!

Oooo Lush Times! (So much better than Lush Times NA) 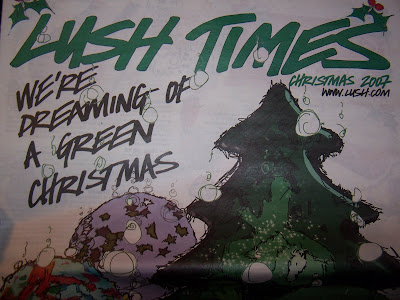 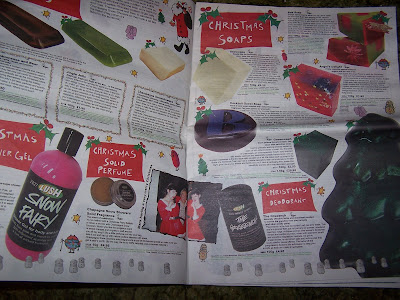 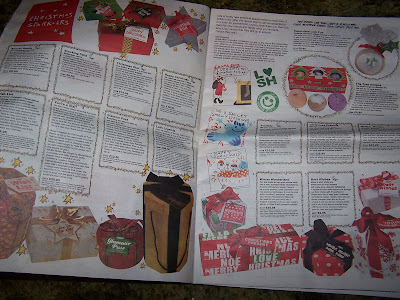 My little eye spies some B at the top! 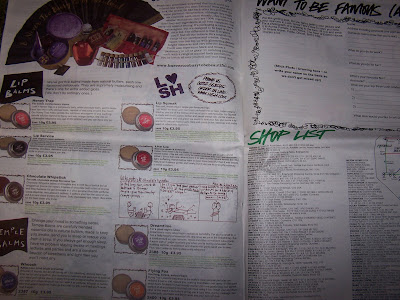 Much to my utter delight (This couldn’t come at a better time considering yesterday’s Goth Juice and King of Mods post was so popular with the masses! Click here for details!) there was an article and picture of Noel Fielding!

The article reads as follows:

Give Yourself a Mighty Boosh

One story about programme’s name is that someone from Birmingham accent saw Michael Fielding (Naboo, Noel’s brother) and remarked about his hair that he had a mighty bush (pronouced boosh, obviously). We’re not so sure. Anyway, it seemed like an irresistible twist of fate; our hair styling products should naturally be named after a programme named after a hair style. Then the Boosh team heard what Lush had done and made Mark Constantine an honorary member of the Boosh Fan Club, the Mod Wolves. (Auntie P had to pay, which seemed like yet one of the many injustices that the cruel world chooses to mete out sometimes. But meh, who cares?) That’s how come Adelle from the press office was an extra on set for series three. The Japanese Lush team love it to bits!

Vist the world of Boosh at www.themightboosh.com and watch clips on www.bbc.co.uk/comedy/mightyboosh/

(If you’re not getting the bit about Birmingham accents….the Muse recommends Google or youTube!) 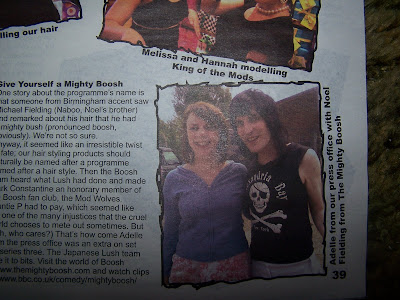 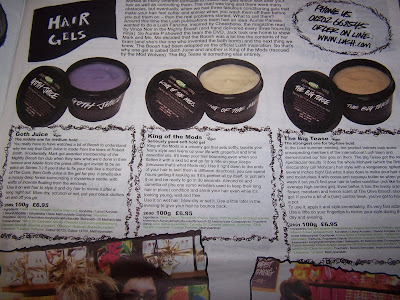 I won’t ruin too much of the surprise but if you ordered from the UK Party you’ll also receive a happy accident bubble bar from the Lush UK Mailorder Team! I won’t reveal the scent but it is a happy little accident to have a delightful free gift from Mailorder! Thanks guys for always making UK ordering so special!

A Happy Accident Bubble Bar! What it smells like? I won’t reveal! A mystery to be solved when you get yours! 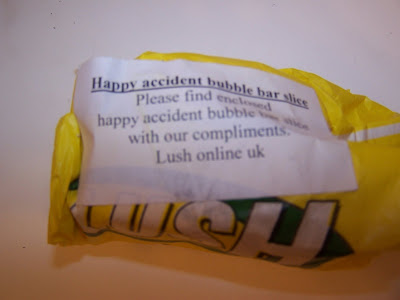 Thanks to Hilary for arranging a great party! Thanks to Lynsey for getting my items to me safe and sound! And big hugs to everyone at Lush UK! Love you guys!