A few weeks ago I had told you about DuWop’s newest gloss entitled Moon Venom. Click for details.

The thing with Lip Venom is you either really love and appreciate it or you loath it. It’s really that simple. I fall into the love group. Some people find that the sting is a bit too much to handle and that’s especially the case if you’re sensitive. I’m not sensitive at all and I find the bite from Lip Venom quite nice. 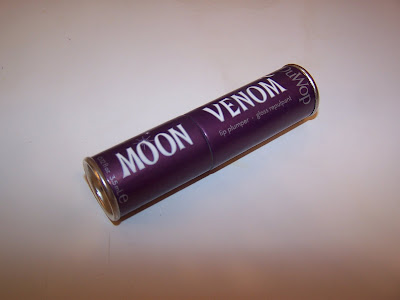 I have all the Lip Venoms they have released up until now and when Moon Venom popped up that too got quickly added to my collection. Each release is different from the last in sparkle. That’s about the only difference in the glosses. They all taste the same, they all give the same clear glossy look, they all work the same to plump your lips up however each has a sheer sparkle to them that’s quite different. Flash Venom comes in versions of gold and silver sparkle while Pink Shimmer Venom, you guessed it, comes in a pink shimmering version. 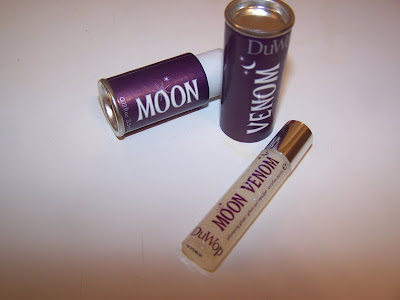 Moon Venom falls somewhat into the Flash Venom category as it’s a similar silver however it’s a bit more of an intense sparkle to it so it looks almost iridescent when applied instead of just straight silver sparkle. All in all it’s quite lovely.

It does it’s normal duty of making my lips look just bitten plus I get the added bonus of such a beautiful sparkle. At $17USD for such a small tube it’s a bit costly however I find these last literally for ages on end so it’s quite inexpensive for getting so little product that lasts for so long. I use my regular Lip Venom for one to two touch-ups daily and it’s about a year old!

Moon Venom is mostly definately a Muse Approved item! But be warned it packs a mighty bite!