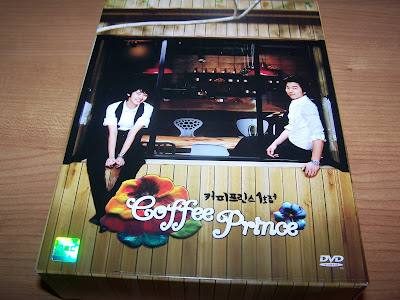 I broke one of my resolutions (See my New Year’s resolutions by clicking here) last week when I ordered Coffee Prince from YesAsia.com but I’m not taking responsible as I was tempted by two evil readers to watch this! It’s their fault not mine! Hehe!

I couldn’t wait to get it as it released the 15th, so I ended up going to Book Off (It’s a Japanese Media Store that sells used books, DVD’s, general Manga, etc….) and purchasing the set from them and canceling my online order. It was lucky they even had it as they don’t always get in the latest K-Dramas plus it was an early release (I ended up watching some of this while on the plane to California)!

I’d like to thank those two readers, Humming and HT, for the great recommendation as Coffee Prince is wonderful so far! I watched the first 5 episodes and I have to say it’s quite darling within the first few hours so I can imagine how great it’ll be as the story progresses! This is working it’s way onto my favorite list pretty fast and I can’t wait to sit down and watch the rest of it (the entire series is 17 episodes so I’ll be busy for a while!). 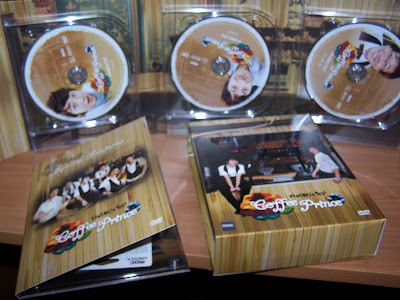 The subtitles are high quality on this so if you’re purchasing the English version have no fear in that direction! One minor complaint is the subtitles are running by really quickly so I find myself rewinding a bit. I’m sure as I watch more I’ll adjust to the quickness and I really can’t rant too much at all since the quality of the subtitling is excellent with the English DVD version (Although I did catch a few times where they referred to “her” instead of “he” and I’m wondering if that was intentional!??!)! Aside from that the box set was really beautiful and well worth the price (as all Asian box sets are)! I believe they had a special press of the DVD box set but I went with the regular one. It was quite a bargain at $79.99 USD as YesAsia was selling it for $99.99 USD!

Yoon Eun Hye is absolutely adorable in this and I was shocked to see her hair cut so short! She can totally pass for a young boy! After seeing her in Palace and watching her in this it’s difficult to wrap my brain around the character she’s playing in Coffee Prince! She presents herself in such a way it’s easy enough to mistake her sex, I find the illusion of her gender especially easy enough to believe as I do not speak or understand Korean so the expression and tones are lost on me. If she is using a feminine tone I wouldn’t notice at all as I’m not familiar with the language enough to catch it so I can easily sit back and see her as a male character without a problem. The tomboy role has been done before with actress/singer Jang Nara in My Love Patzzi but Yoon Eun Hye takes the role of a tomboy and totally turns it on its ear! Gong Yoo looks as gorgeous as ever in this and he counteracts on Yoon Eun Hye’s character so well! The two of them make the ideal, beautiful gay couple (If only Yoon Eun was actually male that is)! Truly they compliment each other wonderfully, one built and tall, while the other is petite and short!

It’s also really nice to sit down to a K-Drama that doesn’t have anyone dying (at least I don’t think anyone will) or having some terminal disease! It’s also refreshing to do away with the jealous character as well. (someone had mentioned the same in a comment on my New Year’s resolution post! I must say I don’t mind the jealous character but it’s rather nice to get away from it for a while and just enjoy a funny love story!) K-Dramas can be a little too typical sometimes! This seems to be a really nice romantic comedy! My head can do without the depressing bits and my heart can really enjoy the laughter and love! I burst out laughing quite a few times already(APOLOGIZE! APOLOGIZE!) especially with the “blind date” who had hairy under arms! I was also smirking during the shopping spree and the dressing up of Yoon Eun’s character in a suit! Very cute scene!

Kim Jae Wook happens to be in this as well which is no great chore on my eyes by any means. His girlish good looks make me swoon (and of course his character probably plays off of his looks, we shall see!)! He’s only part of the supporting cast but really just seeing him in passing will be wonderful to behold as he’s fantastic eye candy! I think maybe the appeal and beauty of bish?nen is lost on most sadly (but definately not on me!!!!!)! He’s too yummie for mere words! He is by all means Muse Approved. Can I haz him on a plate pleaze?

Anyway…..quite off the topic of cosmetics today aren’t I?

I just wanted to say thanks to my two readers for recommending this! I love it so far!

Want to see it?

It’s definately not makeup but Coffee Prince is most definitely Muse Approved for purchase! You’ll want your own copy so you can watch it again and again (I haven’t even seen it all yet but I can obviously see it’s going to be a favorite!)!

This one was well worth breaking my resolution for!