Hold onto your seats we are reboarding the Bobbi Brown Train and my week of Spring Collection reviews continues!

Taking a little break from the Japanese front today I bring you a Spring Collection from the US shores!

I’ve had bumpy rides with Bobbi Brown before but I gave into my need for more Bobbi last week when I seen her on QVC.

I dunno what it is but QVC really sells me on cosmetics! Damn them straight to hell and back (scratch the back part! Let them stay in hell and rot!).

Seriously, you know how it is when you watch QVC and that sudden hardcore NEED rocks your world and before long you find yourself snatching up the phone like the QVC agoraphobia fan club that does daily calls to review cosmetics and skincare they are using in the comfort of their own homes since they don’t venture outside the house!

Wow..that was rather dramatic wasn’t it? But truth be told in that statement my friends! I want to know these people who call QVC at 4AM, my god maybe I’m one of them (no I’m not! I haven’t reached that height of insanity yet thanks very much!)!

As I’ve been saying for the past few days I’ve tivo’ed Bobbi’s episodes like the mad little lady I am and watched them over the past few days and Bobbi sold me on a few of her items. I think maybe it was that host Lisa that really sold me on the items I purchased. You know the one? She acts like you’ll never ever in this lifetime or your second (if you believe in that sort of thing) will you be able to get this super rare, ultra limited edition palette! MY GOD GET IT NOW BEFORE IT’S TOO LATE! WE ONLY HAVE 2 IN STOCK! IF YOU MISS THIS YOU’LL NEVER GET IT AGAIN (Two days later you find it at your local Cosmetics Company Outlet for half the price!)!!!!!!

Wow….what was I saying?

Anyway, I was watching Bobbi slather concealer on a model’s eye while making her up with the Pink Raspberry Palette and in that instant, as Bobbi multitasked through a look like the ultra awesome wizard she is, I realized I too, must OWN this palette! 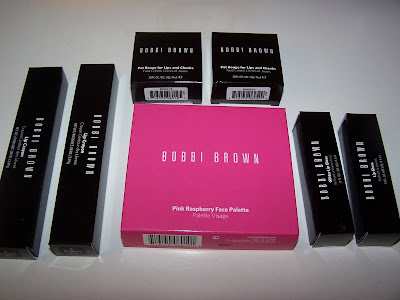 I had previously seen the palette in action on Erika’s blog, Makeup Bag, and as gorgeous as Erika looked sporting the palette I just felt it wasn’t me.

The hot pinks and dark shadows just weren’t calling my name at all however I did end up purchasing two of the potted rouge colors from this collection previously from Nordies which I meant to review but never got around too! Lucky you I’m going to do it all in one big post (prepared to be bored or enlightened or a little of both)!

After watching Bobbi work her magic with the palette I wandered over to her website and started browsing the Pink Raspberry Collection and a few clicks later I had a cart full of stuff I didn’t need but was lemming rather hard (and I didn’t have to pay $4 bucks or more per an item to get it shipped to me! Screw you QVC stop trying to make money off me with your damn stupid shipping costs!)!

Somehow, I’m not even sure how, I ended up with all of the Pink Raspberry Collection and I’m hear now to tell say that you too need all of the collection too simply because I don’t want to be alone with my sickness. 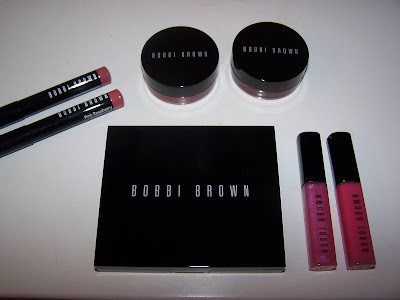 No seriously you really need to check some of this collection out because it has some rather great items!

I think what really sold me on this was the promo images of the models! They look so fresh and naturally beautiful with their full, pink glossy lips and lovely pink cheeks! 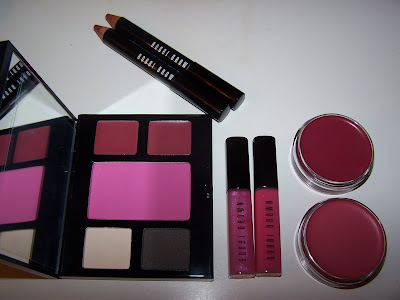 The palette is really a gorgeous yet simple affair that contains some rather vibrant yet elegant shades! At $55 USD it isn’t totally cheap but you’re getting a nice bit of product for the price and high quality product at that. However, you can safely skip this unless you’re really lemming it hard or you like simple makeup! The look this creates is very simple, pretty but still somewhat dull in my opinion! The shadows are matte and plain but the blush somehow makes up for that and when used together you get rather vibrant eyes with popping cheeks if that makes sense at all! 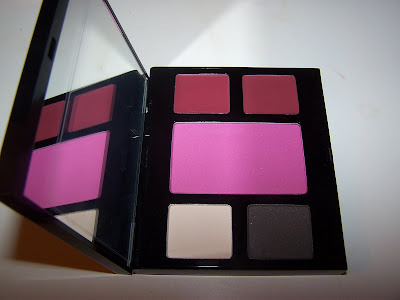 You’ll get a beautiful pink blush, two lip creams, and two shadows. The pink blush is definately the gem in the palette! It’s vibrant and contracts beautifully with the darker eyeshadow as I mentioned above! 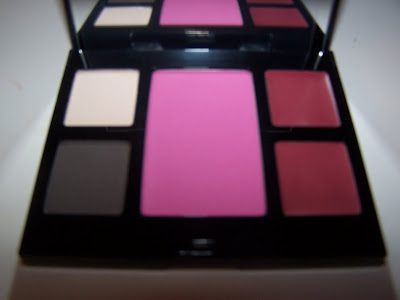 By the very way, strangely enough after ordering this I ended up going to the Cosmetics Company Outlet and finding the Bridal Palette from last year for half the price with almost identical colors in it. It’s the story of my life to miss steals and deals sigh!

Overall, it’s a beautiful palette for the Spring and it can be worked right into everyday use and remains “season-less” for me as it’s perfect for a casual Spring or Summer day! If you so please you can spice up Fall and Winter with a bit of pink as well and use it then!

However I hate the fact that the powder gets in the lipcreams and such! Palettes like this normally get a pass up by me because they are so messy but this one was too pretty to pass up so I guess I’ll live!

A month or so ago I had purchased the potted rogue for cheeks and lips and these definately deserve a look at! I got my colors in Pink Raspberry and Raspberry, one is a light true pink color while the other is a deep pink. These are $22 USD each and have a fitting price tag as they contain a good bit of product for the price plus the colors are pigmented and longwearing! 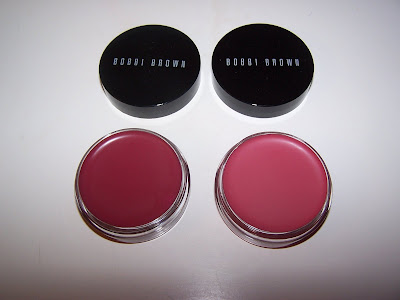 As I’ve mentioned in my last few posts I am now officially part of some sort of Pink Gloss club! I’ve been snatching up Pink Glosses left and right and it appears it’s the height of fashion in my little world (I rule there so back off! You can visit if you behave yourself!) .

I got the two glosses that came with this collection which I originally said wouldn’t look good at all on me. I’m about to contradict myself so hold onto your panties!

I’ve since fallen in love with Pink Popsicle which is a very deep pink gloss! If that wasn’t enough I went and got the Glitter Lipgloss as well in Pink Raspberry! Both are ultra beautiful! Particular Pink Popsicle which makes my lips pop and sizzle! I particular love the applicator on these as it picks up plenty of product to get my lips nice and shiny with little effort! I’m also deeply in lust with the pigmentation as I don’t need to stain my lips prior to use since the color is deep enough to wear on it’s very own! 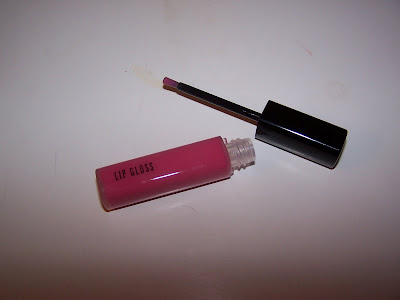 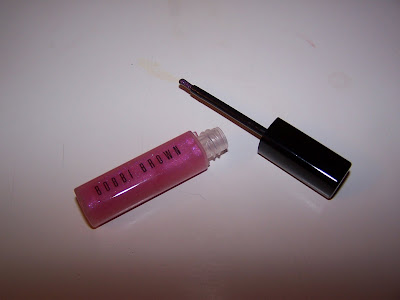 Finally after much debate I ended up with the lip pencils and guess what? I love ’em! I’m not much of a lip pencil fan and I’m also not one for lining my lips but these are too cool! They are super moisturizing and again, like the gloss, very pigmented! A little swipe of these, some gloss on top and you’ll be looking posh! 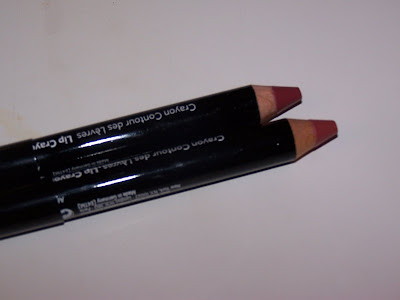 To wrap up all my gushing (by now you wanna vomit) I must say that the collection is great. Previously I was thinking that it wasn’t so wonderful but after trying this stuff for myself it’s making it’s way onto my favorite list for the Spring!

You seriously have to take a look at the Bobbi Brown website or head to your local counter and have a peek! I guarantee you’ll fall in love with a few of these items and want them for yourself!

The Bobbi Brown Pink Raspberry Collection could possibly be one of the best Spring Collections released western side!

I’ll happily stick the Muse Approved sticker on these items!

I know I’m overdosing everyone on pictures lately but I thought it would make up for the fact that my camera takes such crummy swatch shots. At least you can have a general idea of how the makeup looks on so I’ll be including FOTD’s with each of the reviews I do this week!

Below I used the Pink Raspberry Palette plus Pink Popsicle Lipgloss. I found it came out simply nice. Nothing too crazy but not too boring either. Interesting FOTD I’d call it! I’m less then flawless this morning as you can fine lines on my right hand eye due to Bobbi’s Concealer Palette that I reviewed yesterday. It hasn’t been 20 minutes since I put it on and already I have creasing into my fine lines! Rant! I also happened to use Majolica Majorca’s newest lash extender in this FOTD which I’ll be reviewing for you later this week! 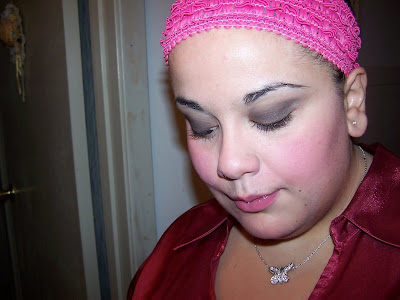 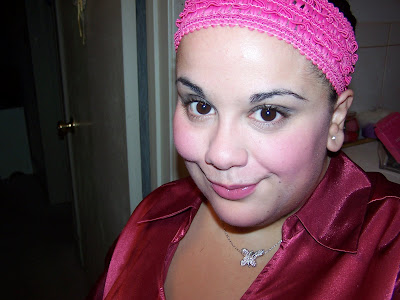 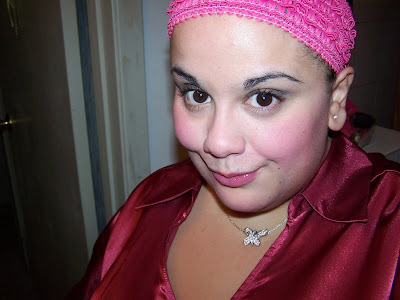 Got some of this already?

Tell the Muse what your thoughts are!

Click here to read about my original train trip with Bobbi Brown!

Click here to read my original impressions of the Pink Raspberry Collection!

Click here to read my mad ravings for the Bobbi Brown Metallics Collection!