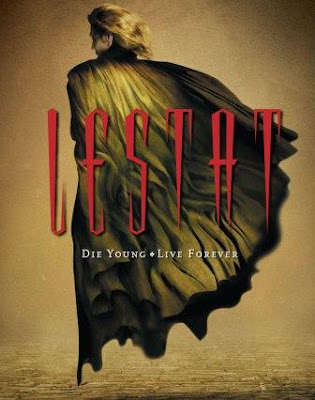 Here’s one for the Lestat fans (there have to be one or two of you out there in cosmetic land).

It appears Anne Rice is returning to her roots and giving Lestat some much needed air to breath, he’s been buried up in his tomb for far too long and many of his fans miss him (the Muse does!). Anne Rice spoke to Time Magazine recently and promises one more book for Lestat.

It interests me she’ll be breathing life back into Lestat but I fear for Lestat’s return as from the article’s tone it appears Lestat will be released back into the head storm of Anne Rice’s religious hurricane (I’m an atheist, no I’m not, yes I am, no I’m not!)!

If you’ve been buried under a rock for 12 years or you’re just not a big reader you probably haven’t noticed the lack of blood dripping from Anne Rice novels as of late. That’s simply because Anne Rice is no longer an atheist and “re-found” the catholic church. In short terms, this meant she’d buried the Vampire Chronicles and ‘the evil” it created for her and she’d take on the new adventure of writing about Christ’s life. I can’t make this stuff up it’s all completely true. A lady that was writing about Sleeping Beauty in Bondage a few years ago is now a hardcore Christian…I dunno..whatever floats your boat I guess…stranger things have happened right?

I’ve done my duty, as a good fan, and read through everything she’s put out (with much difficulty) over the course of the last several years. Reading Memnoch was at times comparable to root canal surgery with a rusty drill!

I guess we do that from time to time with someone we love reading (King is a good example). We fall under the illusion that the next book out will surely recapture the intense feeling we experienced when we originally read the author’s first book. But it’s never really the case is it?

Lestat’s return won’t happen for a few more years yet I imagine (even the article states as much) but I’ll keep some sort of hope (not a high hope…) alive that he might make a colorful reappearance in her next novel! Who knows maybe Lestat will learn to communicate on the same level with Anne that he used to before Anne went off on her trip to Never Never Land without him.

The Muse looks forwards to the gentleman vampire’s return (even though my gut tells me it’s going to be a very weird trip)!

Cheers Lestat de Lioncourt! High hopes for one last big bang before you disappear off the literary circuit for good.

By the way if you’re really missing the goth you can always appease your hunger by reading Christopher Rice’s dribble…that’s not quite root canal surgery…it’s more alone the lines of brain surgery while you’re fully awake!