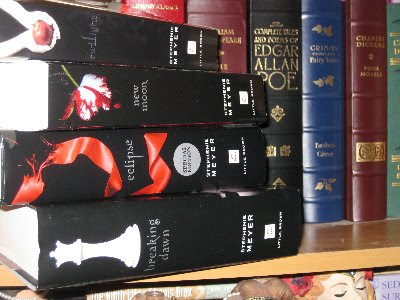 It seems like everywhere I turn lately Edward Cullen pops up. His “face” or the face Hollywood has given him is splashed all over the Internet and it’s difficult getting away from so much publicity when I’m trying hard to isolate myself from Twilight at the moment.

Believe you me getting away from big things like Twilight and Harry Potter is a difficult task to say the least especially considering I’ve been hopping around conventions the last few months where both the film and the books are splashed around a fair bit.

Among my geeker mates Bella, Edward, and Jacob are the topic of endless conversation so again I find it hard to avoid listening to spoilers. My friends are forbidden to discuss Breaking Dawn when I am anywhere around!

The good news is I’ve had Breaking Dawn since August 2nd and have not opened a single page nor will I until I successfully complete my re-read of Books 1 through 3. This same process occurred with Deathly Hallows by the way.

The greatest news is that I’ve successfully closeted myself so well that I’ve heard no spoilers at all about Breaking Dawn up until now…however….my curiosity got the better of me late last night.

I’ve been avoiding reading Stephenie Meyer’s website as well for fear I’d come across some little tidbit that would ruin Breaking Dawn for me however a I mentioned above I became slightly curious and did wander on her site late, late last night/early this morning.

If you haven’t already been on her site or you haven’t visited the forums or you’re re-reading like me and blanketing yourself from spoilers you may have missed something very important, very sad and very horrifying.

Stephenie’s draft for Midnight Sun was leaked recently across the internet and it’s discouraged her so much that she’s put the title on the back burner indefinitely. I can’t begin to tell you how sad I was hearing this.

I know how she must feel right now as I really get upset and emotional when I see people copying my content, reposting my images without proper credit, etc….My body of work is a simple blog that means so very much to me but can you imagine an entire novel that you’ve put your heart and soul into being stolen and handed out on the internet?

How terrible. My heart goes out to Stephenie right now as I can imagine how heartbroken she is over this.

Stephenie has generously supplied the first 274 pages of Midnight Sun for your reading pleasure. I urge you, if you’re a fan, to read these pages from her site in a sign of respect for her creative body of work.

I read all 274 pages around 3:30 am this morning and I was devastated I’d never see an end to such a fascinating piece. Being inside Bella’s head is a roller coaster ride that goes from one emo moment to the next. Being inside Edward’s head is an entirely other ballgame (pun intended! Go Team Edward!).

Finally understanding some of Edward’s struggle while he’s around Bella is heart wrenching to say the least. Knowing how complex Edward’s character is and finally putting that knowledge to text is extremely enlightening. Who would think teen lit could go so deep?

Being faced with Edward’s maturity is an interesting experience. Although Edward is described in no uncertain terms as being mature it’s always difficult to put the idea of his age into full effect when faced with mind images of his “crooked grin” and boyish good looks. However, in Midnight Sun you can finally come to understand Edward’s true age and put aside his seventeen year old face and body and come face to face with his 90 plus year old mind and maturity. It’s interesting to say the least especially if your mind’s eye has misplaced Edward’s age.

If you’d like to read Midnight Sun you can do so by clicking here. I do warn you if you’re a big fan of the Twilight series you may want to avoid Midnight Sun as no end is in sight and it’s difficult reading a draft that may never see it’s completion especially when you become so attached to the characters of a novel.

I look forward to discussing this with you in my comment box if you happen to be a fan of Edward, Stephenie Meyer, and the Twilight Series.

However, I refuse to speak to you if you’re a member of Team Jacob! The Muse no likey!

Please no spoilers about Breaking Dawn, as keep in mind, the Muse hasn’t yet completed her re-read session!

P.S. If Edward “dazzled” you in Twilight you’ll feel the force of his glamour in Midnight Sun!

Here’s to hoping this will someday see the light of a book shelf near you!