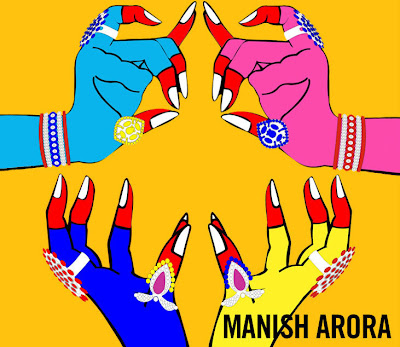 How are you today? Hump day is here w00t! Two more days till the weekend and believe me the Muse is a counting it down!

The bad news is that Manish Arora is completely sold out on MAC’s website (Further Info).

The worst news is that MAC failed to include face charts for Manish Arora! Damn it MAC please let it be face chart now!

The good news is that it isn’t officially released yet in stores soooooo that still gives you time to get your greedy little hands on it if you so desire!

Tomorrow morning Manish Arora for MAC should be live and available at MAC Soho as of 11 AM which means you should get dialing to have them hold it for you! I’m unsure if they ship but I’ll be calling in a little bit and asking so stay tuned for an update here letting you know. If they do ship it’ll be US only and around $7 for UPS service.

MAC Pro NY is officially sold out of the collection as they had an early launch party for it and I’m unsure about MAC Pro North Robertson in CA but I’m making a big assumption that they possibly did the same as MAC Pro NY however I’ll be calling later to verify as I’m on a different time zone so it’ll be a bit before I can update you on west coast news!

For now, if you’re in New York and you want the collection head to MAC Soho tomorrow to get it or call ahead to reserve it…and as I said I’ll update you later about whether they ship or not!

And finally the best news is that my order should arrive today so I’ll have the review and swatches up hopefully today for you before the collection goes live tomorrow!

What did you haul?