Last month I went into my closet and realized I was down to my last bottle of Lush Comforter Shower Gel! Oh woe is me! 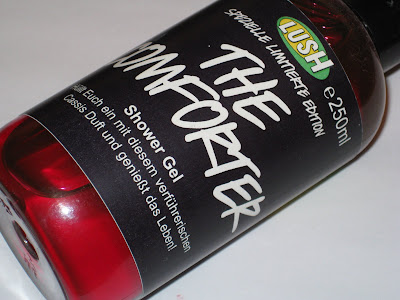 T’was a sad day indeed! Instead of using it I tucked it back into my closet and decided I’d save it for a special occasion. I resisted as long as I could and finally I tucked into the bottle and as of last week it’s almost completely gone. This week I was planning a funeral for my last bottle when I realized that, gasp, to my shock and surprised that Lush US was offering Comforter Shower Gel! I think I heard the angels sing! This truly was wonderful news!

This is the first time Lush Comforter Shower Gel is available in the US! It’s original release was about a year and a half ago as a special LE from Lush Germany. Now this was indeed a special time as not even Lush UK had this available which is the source for all LE products from Lush! The Muse was lucky enough to nab six bottles of Lush Comforter Shower Gel thanks to her x-boyfriend’s sister, Leeza who was attending classes in Germany at the time! Yay!

No idea what the hell this says but I promise it’s good stuff inside! 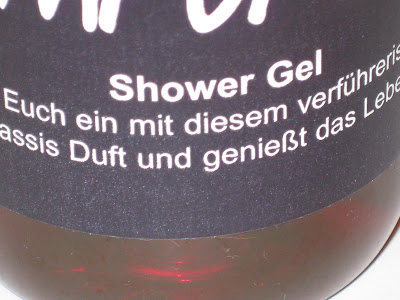 I’m actually quite excited about this release as I recently got my Lush UK Perfume Party order which had my Lush Comforter Body Lotion and Comforter Perfume (review coming soon!) inside so now I can layer with shower gel, lotion, and perfume! Life couldn’t be better!

The moral of today’s story is you should be heading to Lush as soon as humanly possible and snatch up as many bottles as your cart can hold because a shower without Comforter in it is a sad shower indeed!

Be it bubble bar, lotion, perfume, or shower gel, Lush Comforter is always Muse Approved for Purchase! Click to start shopping for your Comforter!

Love the unusual scent of Comforter?