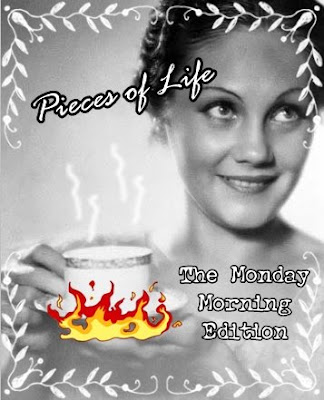 Happy Monday! Oh my god tis like the Monday from hell! Was so hard dragging my butt out of bed this morning after having so many days off. I swear the last few days have been so completely relaxing! I’m always running around doing this, that, and the other thing and never have enough free time to just sit down and veg! The last few days I did just that. Total vegetable. It was so lovely. I caught up on a few books I’ve been meaning to read, played stupid amounts of WoW, watched a slew of geeky flicks with my mate Martin (we generally have the same retarded taste in sci-fi films one of which was Capricorn One circa before James Brolin became Barbra Streisand’s b*tch…what? I love Barbra but we all know she has James on lock down!), and just really enjoyed doing absolutely nothing!


Jump ahead to read more about my Monday, the weekend, and what’s ahead at Musings!

Oh and I was really productive and stuff this weekend too so I did do other stuff that wasn’t in the realms of playing dead and acting like a veggie! Read on….

For the longest time my main ring tone was the Time Warp so I decided to change it this weekend. What? I’m still in Halloween mode I guess…sue me!

Check it and tell me whatcha think 😉


I also switched up the slider to play the sound of the Tardis launching! Loves it!

See? Told ya I was productive!

I have a slew of posts for you today including my Year End Favorites list, my New Year’s Resolution post, a giveaway or two, and a few other tricks up my sleeves so stay tuned! Oh which reminds me I know the past few days you haven’t seen many reviews but don’t worry those are coming along too and we’ll be back to cosmetic nirvana shortly!

I hope everyone had an amazing weekend and you’re back on the “back to work” bandwagon! After a few diet cherry pepsis, some tea, and a bit of coffee the Muse promises you’ll be all awake and alert enough to deal with Monday morning!

Feel free to spread the cheer about your weekend and what you did, what you hauled, and any trouble you got into! My comment box is open and my eyes are listening!