The Muse thinks that the order of business this Spring appears to be cream shadows. They sure are popping up everywhere aren’t they? 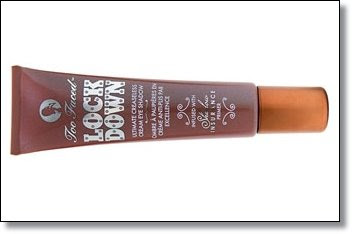 Urban Decay has an extensive list of cream shadows to choose from with their Spring Collection and Lancome is also releasing a new cream shadow but today what has the Muse’s interest is Too Faced Lock Down Creaseless Cream Eye Shadow.

The Muse believes that her lovely friend, Pursebuzz, was the brains behind the concept of Too Faced Low Down Creaseless Cream Eye Shadow. A few months ago Pursebuzz was in her laboratory and came up with the idea to combine Too Faced Shadow Insurance with a bit of pigment to create a colored shadow base….

And whatta ya know..we now have Too Faced Low Down Creaseless Cream Eye Shadow which indeed has a base of Too Faced Eye Insurance Primer! This indeed looks promising however it’s only available in four shades so far which disappointed the Muse who really likes variety but hey it’s a start!

Which are you lemming more…Too Faced Lock Down or Urban Decay Cream Shadows?