As I recall it these were around a good deal ago. Same packaging, same creamy texture, and a few of the same colors too I think! Of course, I didn’t mind a rerun as they turned out damn well this second time around. But I couldn’t help but wonder what exactly was different about these new shadows, if anything?!

Jump ahead to finally hear the mystery solved!

I remember having an Urban Decay Cream Eye Shadow in Midnight Cowboy many moons ago and another shade the name of which escapes me at the moment and of course when they re-released these I couldn’t help but wonder had anything changed? I also realized that MANY of you were wondering the same thing as I’ve gotten dozens of emails asking me, “Please Muse what’s the difference between this version and the old version?”. 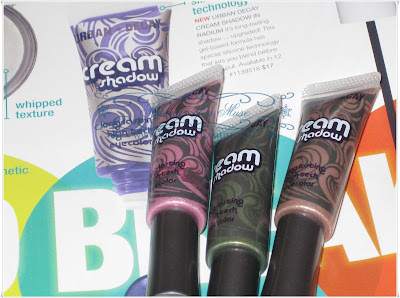 Turns out I’ve finally solved the mystery! The new version of these shadows have “silicone technology”. Clever right? Who knows what the hell that is….I had to do a little homework and from what I understand the shadows do indeed have a brand new formula that has a special silicone texture which lets you blend well before it stays put. Another words these shadows stay “wet” and “creamy” a heck of alot longer than normal cream shadows so it gives you plenty of time to blend it up before it dries down. 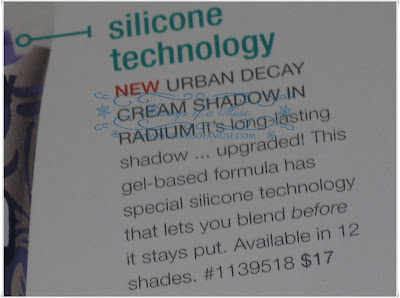 This makes perfect sense as the texture is indeed an interesting loosely packed cream formula which doesn’t dry down right away. I both love and hate this because 1. it does make it easier to blend and 2. it kinda makes it a little bit difficult too! It’s all about packing on the right amount of color so you aren’t left with a streaky mess!

That’s the mystery solved in case you were wondering what it is that was different about this release and the past release.

Shout ’em at the Muse!