Ahhh blessed relief. Let’s all let out a collection sigh of utter, blissful relief. My good friend Iris from Rouge Deluxe reports about the Lavshuca Fall Collection 2009 and what a pleasant surprise it is! 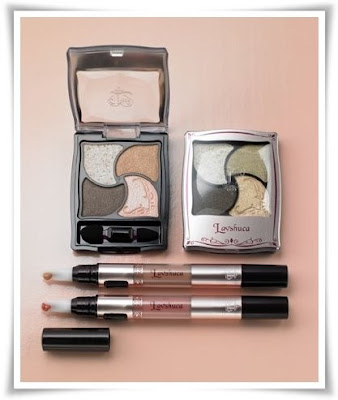 Finally something great to look forward to from Lavshuca this year.

With it’s disappointing release after release as of late Lavshuca has fallen into the do not buy list for the Muse. Look at Summer, utter disappointment there!

My last known purchase from Lavshuca was Summer 2008 and I do think, currency conversion aside, this is testimony how bad collections have been as of late from Japan. Because seriously if I’m not hauling something is terribly wrong.

But have no fear the Lavshuca Fall Collection 2009 is so something special to look forward to it appears. The floral motif and interesting color selection shown in the photo above is enough of a reason to get this Muse excited. I’m looking forward to how this develops and I’ll start saving my pennies as of now so I might indulge. Iris reports the following items will be released:

Count me excited for Fall to get here!