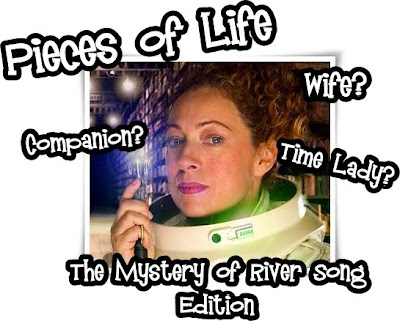 If you’re not wanting to know about what’s happening when Matt Smith slips his feet into David Tennant’s old pair of chucks next year please disregard this post.

I was up late last night speaking to World’s Dresser on Who theories. We got on a discussion about River Song and I have some interesting info about her after the jump!

As many of you know I’ve been twittering ALOT of Who coverage lately. I got a SLEW of e-mail after my discussion last night and the main topic of the e-mails was River Song, a mystery if ever there was one.

River’s original debut in Silence of the Library left alot of us wondering who is this brave woman with a sonic screwdriver all her own!? Speculation has rounded the Internet with tales of River possibly being a Time Lady (honestly this isn’t too far fetched considering not one but two Time Lords survived the Time War so why not another?) or even the Doctor’s own wife (she does after all know his name). All rumors about her are always a welcome way to pass the day.

The moral of my post today is River Song will return and finally the mystery of who (pun intended) she is and what relationship she has with our new 11th will be solved (remember now she knows our 10th but he hasn’t yet met her so isn’t sure really who she might be or how they know each other! Our 10th traveled so far back in time that River had already met and traveled with the 11th. Her past is in fact our 10th Doctor’s future). The Sun UK has posted a few images up of production and low and behold a photo of the mysterious River Song does so appear (Click to start the pop up, 7th photo and 8th).

I won’t say more as my mouth is possibly foaming with gossip. By the way looks like Karen has been shopping in David’s closet, nice chucks dear.

Feel free to discuss or e-mail.

Back to our regularly scheduled makeup posts up ahead shortly!