As you know Hard Candy has several new blushes for Spring 2011 entitled Fox in a Box. These are broken up into blushing quads and bronzing duos and housed in tiny boxes kinda like our beloved Benefit packaging but with a budget price tag.

The blushing quads are available in four shades and I believe they are $6 each (don’t quote me on the price). If you’ve always wanted Benefit’s version because of the cute packaging this might be one to look into or just because they are rather cute and have a nice inexpensive price tag. Find it after the jump!

A boxed blush quad featuring four shades of color to mix and match! Packaging is adorable and definitely appeals since I look at them and instantly think Benefit however the box isn’t nearly as sturdy and it’s a bit flimsy in comparison. It does contain a generous amount of powder at 0.20 oz compared to Benefit’s version of 0.28 oz at the price of $28. 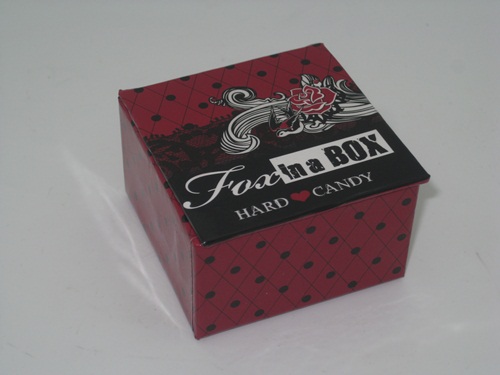 The powder has a flip lid with a brush stored in the flap with a small stretchy band. The brush is pretty tiny so you’re better off using a brush of your own to swirl around in the powder and buff into place. The shade I tried was Hot Flash which proved quite nicely pigmented. The color was made up of two shades of contrasting beige peach in a matte and semi-matte formula plus two shades of contrasting pink in the same finishes. The bright pink and fuchsia shades were definitely pretty and the beige-y shades tamed these colors down so the blush applied without being too loud or vibrant. The powder wasn’t too silky and it proved a little difficult to blend out at first but I smoothed it out properly and felt it left behind a nice bit of color! The box is a bit flimsy so you won’t want to travel with it less it crush or tear.

The brush is quite scratchy and sheds a good deal. I wasn’t particularly keen with the chemical scent that the blush had but not too bad.  I had a tad difficult time blending it out at first due to the matte formula that wasn’t particularly silky. It does take a little TLC to get it into place correctly due to not only the formula but also the louder, brighter shades in the quad.

Overall, Hard Candy Fox in a Box proves a very cute, inexpensive blush find. I liked it well enough but it had a few quirks to it that prevented me from giving it a complete Muse Approval. I’ll probably indulge in a few other shades when and if I finally find them at my local Evil Empire. The blush is a good value compared to more inexpensive higher end products so it might prove fruitful if you’re on a strict beauty budget. I wouldn’t call it amazing but it’s pretty good at this price. (Fox in a Box in Hot Flash on Cheeks)

If you tried Fox in a Box I’d love to hear your thoughts, do share ’em!