I love Captain Barbossa more than I do Jack.

Oops sorry was there a hiss out in the crowd?

What? He’s a crusty old pirate, what’s not to lust after? Plus Geoffrey Rush does a damn fine job bringing him to life!

But dude, what up with the Pirates of the Caribbean Captain Barbossa Action Figure? OMG You’re doing it wrong Disney! WTH? He looks almost kindly in action figure form….not very pirate-y! And why is his head so damn long? Disney is launching a brand new Fragrance Collection in Disney Stores this month! I’ve always wanted to smell like my favorite Disney characters. Betcha Jack and Barbossa smell like a great big heap of yo ho, ho and a bottle of rum!

Disney Store announced the launch of its new fragrance collection recently and will be bringing it out in Disney Stores this month.

The collection will feature an array of personal fragrances, home scents, candles and unique gifts that were created in conjunction with some of the world’s leading fragrance houses, perfumers and an award-winning design team.

The first fragrance in the collection entitled Imagination will be available starting this month and others will be introduced throughout the year.

Imagination, the signature fragrance is described as an enchanted forest of sequoia trees, cool moss and green leaves. A timeless scent inspired by nature that instills a feeling of natural calm. An unforgettable blend of icy blue mint, rich chocolate and invigorating sea spray, epitomizes the adventure of Disney and all that is Mickey Mouse. Along with Imagination, its inspiration comes from the outside world to give it a refreshing sense of nature.Magic is the freedom of children playing outdoors; it’s a breeze of fresh, cool, minty air, green grass, clean woods and a surprise of chocolate. 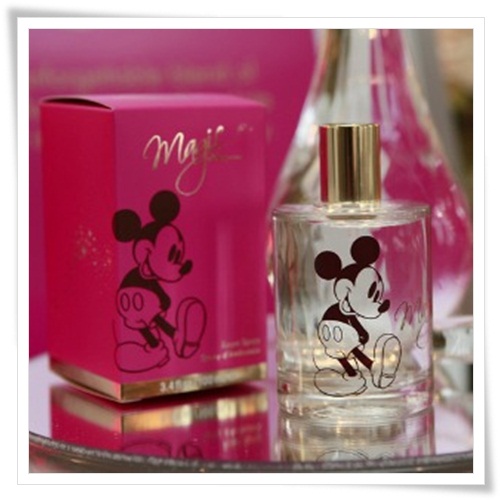 Pixie Dust, a shimmering scent of citrus sorbet, candied fruits and summer rain, is the fragrance inspired by Tinker Bell. It’s the fragrance one could imagine floating through the air as Tinker Bell showers the earth with her Pixie Dust, causing nature to blossom.Pixie Dust captures Tinker Bell’s personality perfectly – it charms with a shimmering sweetness yet it also has a subtle hint of sassiness that we love about this beloved Disney character. I can totally see myself buying Pixie Dust!