Ahhh Maybelline Dream Fresh 8-in-1 BB Cream coming atcha in June according to word around the Internet. It originally released a few months ago in the UK and now we are finally seeing it here in the US shortly.

I’ve had one for a little bit that I purchased from the UK and was kinda sitting on it but I thought I might as well review now that we’ll see it in our market. Maybelline Dream Fresh BB Cream promises an 8 in 1 formula but some of the “8 in 1” claims are kinda silly. For example, “creates a natural glow…” “feels fresh…” I’m not sure if these should qualify as part of the formula but hey, ok, we can deal. 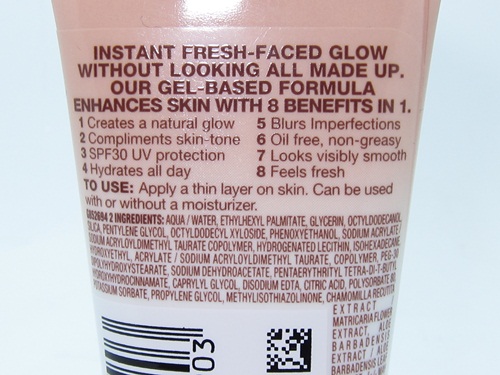 Ok, so overall, they have taken out the BB Cream aspect with some of these “promises” about the formula. Nothing about anti-aging here, nothing about improving skin, and the formula is fairly light with very little pigment so the points are raking up as this is not a BB Cream.

It’s going to be available in five shades, so again, it’s taking away from the traditional BB Cream formula.

If it’s a tinted moisturizer, please, call it one. Throwing BB Cream around in the title doesn’t make it one.

If you can get over the disappointment of it being named a BB Cream with a formula that’s more of a tinted moisturizer you’ll be a-ok. However, if you’re expecting a traditional BB Cream formula, look elsewhere, it is NOT a BB Cream.

This is a gel-like formula that’s highly hydrating. It feels incredible on my skin. The texture starts out thicker with a water based formula that’s super moisturizing but it does run a little thinner as you massage it on which results in a lightweight feel and texture on skin.

I’m in love with the formula. It just sits comfortably on skin, melds beautifully, and remains lightweight through the entire wear time without being oily or greasy. Maybelline choose a perfect time to introduce it as it’ll work as both a moisturizer and a foundation product all in one for Summer. Coverage is zero…it’s very subtle color pay off so it’ll perfect somewhat and even gives skin a “fresher” look but it won’t conceal major problems, dark spots, acne, etc…if you need a full coverage BB Cream and/or foundation product this won’t work for you. However, if you wanted something that perfects skin like a tinted moisturizer this works perfectly. It doesn’t oxidize too quickly either so that fresh faced glow remains in place for a good deal particularly when you set it with powder.

The sun protection here, as far as I’m concerned is a little low but some sun protection rather than none is appreciated however you’d have to apply a TON of product to get the best results so using your own SPF prior might be a better solution.

I tried this in medium and it’s the only shade I’ve actually seen in person for myself. I think light would have been better because as you can see medium runs fairly dark. I’m curious if light will prove a better option. I think maybe if you’re a medium shade this could prove a little dark for many medium skin types so it appears the shades might run pretty dark.

Overall, Maybelline Dream Fresh BB Cream has a great formula. It wears comfortable, it doesn’t fade or oxidize too quickly, and it feels lovely on skin. What it isn’t, however, is a BB Cream and I can’t help but argue, rant, and complain about the fact that the US Market is just not understanding the idea behind a BB Cream and just have embraced a “trend” for money making purposes only.

Those who have never used or heard of a BB Cream before won’t really mind but those familiar with Asian BB Creams will proceed to feel a little disappointed that they so casually toss around the term “BB Cream”.

Have you tried Dream Fresh BB?