Thanks to Clinique chubby pencils seem to be right on trend for Spring 2013 with many a drugstore introducing their own variation. With such a repetitive product circulating across many different avenues one would think I’d be a tad tired of seeing it by now. But I have to admit the excitement is still there with each new tinted pencil that releases.

Are you tried of tinted lip pencils yet?

Neutrogena Moisture Smooth Color Stick range at around $7.49-$8.99 each depending where you buy. The eight shade selection is in no way competition for Revlon’s larger variety of pencils however, some folks might feel the formula is one. Not everyone loved Revlon’s texture however, I was personally a big fan. Moral of the story? They have their own separate characteristics compared to other pencils.

The formula promises to condition lips through the wear and improves the appearance of lips within a three day period. Personally I felt like they softened my lips and offered moisture throughout the wear but not after. They are supposedly made with real fruit extracts as well as mango and shea butter. They have a twist up design so you don’t need to sharpen them after the point dulls, simply twist up.

Some reader’s expressed a dislike for the stronger citrus-y fruit punch flavor and scent. I personally liked it. If you’re sensitive to fragrance and flavor in your lips products you might want to avoid. 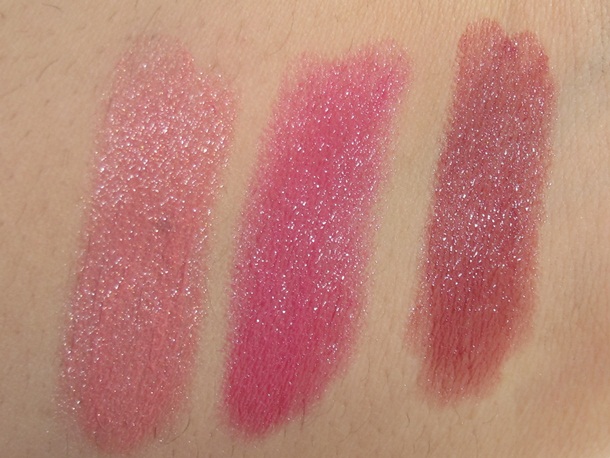 These stand out for me because they lack the balm-yness I associate with Clinique’s pencil. They have more of a lightweight glossy feel on lips, dare I say a little silicone-y but nothing uncomfortable. They remain virtually weightless through the wear with a high sheen and a good deal of color that’s quite opaque in finish. Pigment will vary from shade to shade but all three colors I purchased had sheer to medium color pay offs with an opaque finish. Color wears anyway from four to five hours on my lips without migrating, fading, or morphing in anyway. They remain moist, soft, and hydrating through that wear time. The pencils have an easy glide across my lips (even when they are dry) and have a smooth finish with a little sheen that isn’t terribly glossy or shiny.

Overall, I liked them a lot! I do admit to enjoying Revlon’s version a little more because of the bolder pigmentation of some of the shades but Neutrogena is a close runner up. If Clinique’s version wasn’t pigmented enough for you and Revlon’s wasn’t moisturizing enough I think you’ll like Neutrogena’s formula. These provide moisture and just the right amount of tint that is noticeable on lips. Def worth picking up!

I look forward to your thoughts!