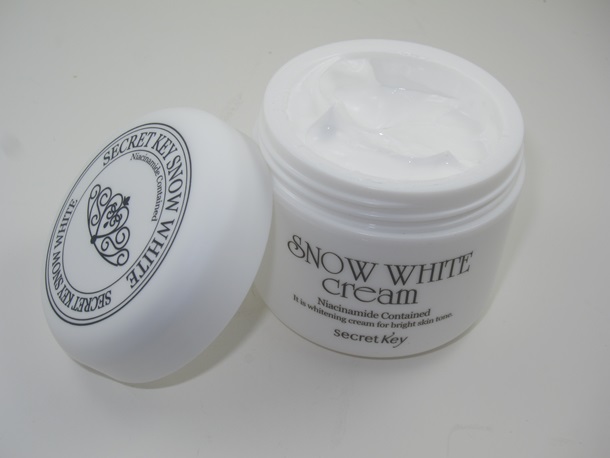 Secret Key Snow White Cream actually works best as a primer or to be used after the Snow White Facial Mask but not as a moisturizer on its own especially if you have drier skin. I find it does nothing in the ways of hydrating well but does act well to prime skin for makeup or as a follow up after the mask treatment.

This comes in a jar with a spatula for application. The spatula ensures you don’t have to use fingers to apply the product however, the open and closing the jar does nothing for keeping the product fresh sadly so whatever form of niacinamide they are using here will likely be rendered useless due to the packaging.

But…I liked what I tested so far so I’ll carry on through with it until Feel like it isn’t working anymore!

A high level of niacinamide is supposedly contained in this jar which has been proven to improve skin’s elasticity and help with discolorations and just giving skin a more healthy tone. In this case they use it to create a brighter appearance.

This is a thicker creamier texture but not as creamier as Etude House’s recently launched Baby Choux. It does however, work in a similar fashion as Baby Choux! I apply it before makeup to create a more brighter appearance. It doesn’t leave behind the pasty finish one would expect but simply lends more of a brighter appearance to skin. This in fact makes my BB Creams (or CC Cream) look even more refined and flawless after applying on top. I find it absorbs fairly fast but doesn’t really have the benefits of a moisturizing cream so I do apply all my skincare prior to this and use it as a primer only. I do like the effect of using it in combination with the facial pack though. After applying the pack and rinsing it away I use as my night moisturizer, sleep, and in the AM my skin looks a good deal lighter. The effects are temporary though from my experience so my typical dullness is eased, my skin looks brighter and lighter but I haven’t noticed any long term benefits thus far. On its own I don’t see the lightness it produces when used in conjunction with the mask so if you desire both lighter and brighter I’d combine the two products for the best results.

I don’t think it’s nearly a good product as the Etude House Baby Choux though. They seem to have earned a spot on my HG (holy grail) list with no end in sight as they really do an excellent job with dullness.

As I mentioned in my post on the mask I think they use the same trick that many Korea products do which including titanium dioxide in the formula to give skin a more whiter, brighter appearance. I think the mask def has a little pastiness to it but the cream can be used on a range of skin tones and still looks quite natural once makeup is applied.

It’s possibly an odd product for some to read about but I certainly admit to using whitening products since I feel like it addresses some of the dullness I experience with my own skin. I’m not looking to whiten or lighten my skin merely take my more tired, duller, drier skin and liven it up and products like this do a fairly good job of addressing the issue.

If you’re interested in trying it you might want to check out F2Plus1 on E-bay (not affiliated) as she sells a variety of Secret Key products including this cream.