The Buxom Dolly’s Opening Act Full-On Lip Polish & Creams Set ($29) is a collection of six mini glosses in a variety of shades and finishes that Bare Minerals packaged up for the Holidays. 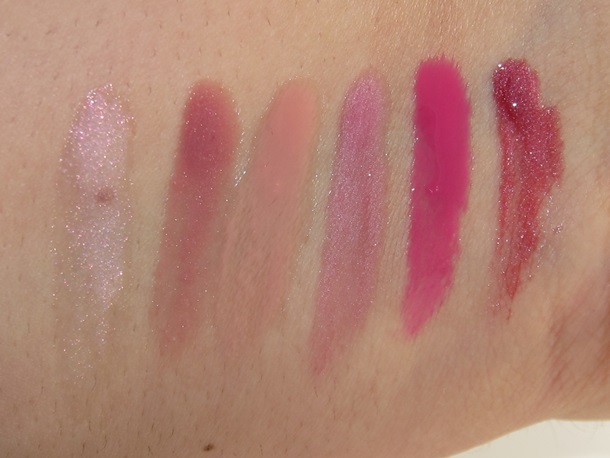 I can’t believe I’m going to say this but the set doesn’t contain a single shade that I didn’t like. GASP! Whoa! Too many times I indulge in Holiday Lipgloss Sets that are made up of 50% off shades I like and the other 50 I don’t! But Dolly’s Opening Act has a great selection of wearable shades that I actually adore.

The collection is made up of the original Lip Polish formulas for the most part (three shades) and the other shades are Full-On Cream Lip Polishes. A majority of the shades here have a lovely tint but not full color however, a few shades do produce more than a mere tint! Berry Blast and Michelle both have excellent pigmentation and full opaque color on lips. The formula has a peppermint vanilla flavor and taste with a slight tingle when applied (beware if you’re sensitive) as this is a plumping formula. The sheerer shimmery shades have a lighter texture and leave lips with a plush, pout-y finish. These wear for about three to four hours without eating or drinking. The cream shades and more pigmented colors have a longer wear at around five hours without migrating, fading, or losing their intensity! For example Berry Blast easily wears for five hours so long as you’re not eating or drinking with it in place…! The formula is comfortable by not hydrating or moisturizing nor is it too tacky or sticky! The tackiness is just enough to allow the gloss to adhere to lips for a long wear but not so much so that it irritates you because it is too sticky.

This is a new way to open yourself up to Buxom Glosses if you haven’t yet tried them as you get six generously sized glosses for under $30 (and even less during the Sephora Friends and Family sale starting tomorrow).

As Buxom fans already, just check your stash prior to indulging as a few of these are repromoted shades!

You can get this now at Sephora and Sephora.com.

Are you a Buxom Lipgloss fan?