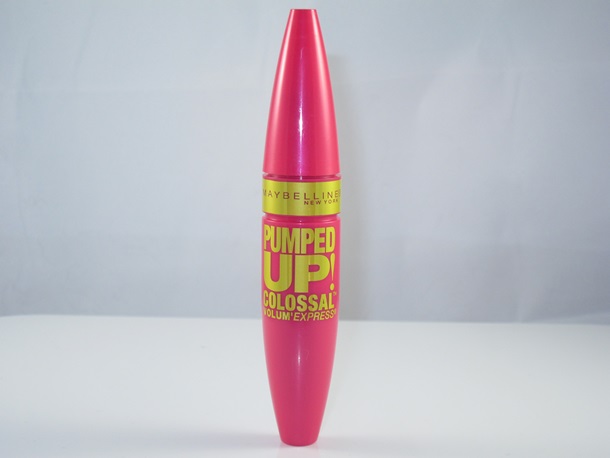 Maybelline Volum’ Express Pumped Up Colossal Waterproof Mascara comes equipped with a thick oval brush. The wand itself has a twist design but technically speaking this isn’t going to do much for you during application, it’s just a fun design!

The formula runs rather wet but doesn’t make lashes stiff or crunchy on the set. It removes easily enough at the end of the day and on my drier eyes it didn’t smear or flake! It does seem to take a moment to dry down so be careful when blinking with it on as you might end up with a mess. Initially I applied it and I had a bit of clumping chunks of wet mascara going on! There’s a slight learning curve with the brush but you can master it after two applications and avoid the clumps easily enough. I found it curled my lashes very nicely but didn’t hold the curl throughout the day. Funny thing about this one…it’s marketed as a voluminzing mascara but in my experience with it my lashes weren’t fuller but it did produce GREAT length. It added a good deal of length to my lashes and gave them longer falsie look. I was disappointing with the volume aspect though as it does space lashes apart slightly when adding that length. Regardless, I still looked the overall longer look of my lashes after using!

I’ve always had rather good luck with the Colossal Mascara range and I do believe Maybelline Volum’ Express Pumped Up Colossal Mascara was a great pick up at merely $5.99. I think the thing I like best about the Colossal Collection is the fact that typically they run around $5-$6 so I’m not spending nearly $12-$14 on a drugstore mascara. I’m of the mentality if I’m going to pay $12.99 for drugstore mascara I might as well just go to Sephora and grab something…! But I’ve always felt the Colossal mascaras are price at a very fair price and in most cases they work quite well for me. Don’t expect plumped up lashes as it advertises but do expect some really great length….!