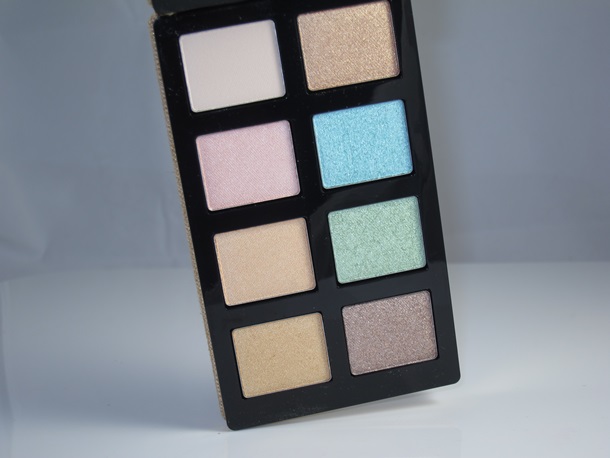 Bobbi Brown Surf Eyeshadow Palette features eight shades of eyeshadow and comes housed in a burlap textured flip palette with a magnetic closure and a full size mirror. User beware, I find these eyeshadow palettes gorgeous but really difficult to travel with as they will likely flip open if you aren’t careful about how you store them during travel. Just a warning!

I do think the Sand Eyeshadow Palette has a much nicer offering that the Surf one. I found the shadow formula and pigmentation far superior in comparison to the Surf Palette. Although visually this palette is very pretty with both shades of the surf and sand so you get both warmer and cooler shades in this palette where as the Sand Palette was all about warmth! I think the Surf Palette really embodies what the collection is going for as it features some cooler aquatic shades that represent the sea and some warmer golds, bronzes, and taupes that represent the sand. The shadows come in a range of metallic, satin, matte, shimmer, and sparkle finishes. I typically adore Bobbi Brown Sparkle Eyeshadow but one of the more disappointing aspects of this palette are the sparkle shades. Surf Sparkle and Sea Foam Sparkle have virtually no pigment and can only be used as an over coat or a sheerer wash of shimmer on lids. The texture doesn’t bother me as all of Bobbi’s Sparkle Eyeshadows have a chunkier, flakier consistency but some might not love the fall out that you have to contend with during application. There’s one matte shade here and one satin both of which are quite dense and dry with sheerer color pay off. Out of the eight shades I would say that Bikini Bronze Metallic and Sunny Gold Metallic are the best textured shadows (I’m wearing both below) with the best pigment. Other shades are just a very sore disappointment with either too dry a formula or little to no color pay off.

If you are shopping the collection I do recommend Bobbi Brown Sand Eyeshadow Palette because unfortunately the Bobbi Brown Surf Eyeshadow Palette isn’t what I expected. Visually this is a beautiful palette but actually working with it will prove a disappointment. In my experience, I had to doctor things up to get the look I wanted to go with! So above I used some of the shadows in the palette for the “sand” portion but I used some Urban Decay 24/7 Eyeliners to get the “surf” portion in my look since the aquatic shades are so disappointing here. Can’t win them all can you?

If you want to save money you can skip the Bobbi Brown Surf Eyeshadow Palette but if you do want to indulge it’s available now at Nordstrom.com, Bobbibrown.com, and at counters.