L’Oreal Pop Balm is a new tinted lip balm that’s launching at drugstores in 12 or 14 shades. Don’t quote me but L’Oreal Pop Balm originally debuted on Ulta.com and even appears on L’Oreal’s own site as having 4 shades but I came across a display at Harmons featuring a SLEW of different colors!

You might recall that L’Oreal actually introduced Pop Shades Colour Riche Balm back in 2013 and I thought perhaps the Pop Balm formula would follow in the footsteps of that release but that’s not the case as those Pop Shades were actually considerably more pigmented.

L’Oreal Pop Balm is what L’Oreal calls the next generation of lip balm with a formula that contains Jojoba and Shea Butter and promises a full eight hours of hydration. You might remember the original L’Oreal Colour Riche Balm released in 2011 also promises eight hours of moisture as well and aside from slightly new packaging these are pretty much the same exact thing as the Color Riche Balm formula aside from the fact they contain the tiniest bit more pigment depending on the shade of course as pigment does vary from sheer to nicely tinted. Also the originals made no mention of jojoba or shea…! 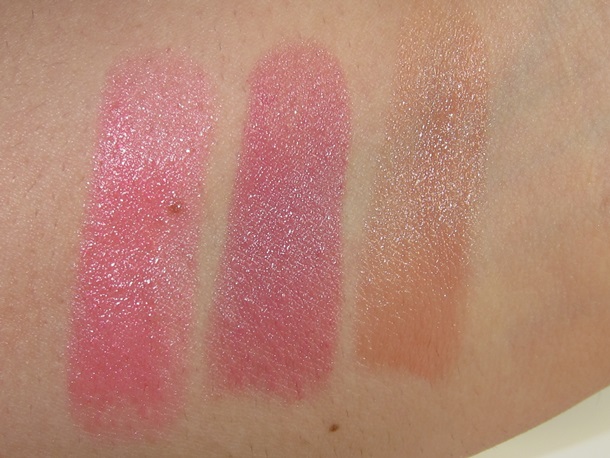 Originally I thought that L’Oreal Colour Balm was a competitive product for Revlon Lip Butter but in reality the formula is quite different. For me these are a step above Maybelline Baby Lips and since I don’t like Baby Lips the fit they bill for both moisture and a hint of tint!

I LOVE these but they have quirks. First off, don’t haul every single shade! Most of the shades end up looking the same on lips. Secondly, don’t expect a ton of pigment! In the tube they look pigmented, on your lips they aren’t.

I find the texture a little slicker and a bit more shiner than the original formula. They have an easy, melty glide across lips and provide a nice bit of moisture but I wouldn’t call that moisture “eight hours of hydration”. The shade pigment is inconsistent so I ended up returning many of the colors I originally purchased and didn’t use because they all looked the same on. So out of 12 purchased I only kept 7. Some have great tint and others add shine and just a hint of natural tint so it does vary from color to color. I don’t really detect a flavor or fragrance from these for those sensitive users worried. I find they have less of a balmy texture and more of a lighter feel when compared to Baby Lips which is the reason I like them as they aren’t just laying on my lips but seem to absorb nicely! My lips also feel nicely softened after they wear away which is typically within a three hour period. If you have pigmented lips you’ll like find these enhance the natural color of your lips. For those with less pigmented lips they will add a nice hint of tint but nothing too dramatic.

L’Oreal Pop Balm are fun. I liked them the first time L’Oreal introduced them and I like them the second time around but I will express disappointment they are essentially just new shades (that are dupeable and all look the same on lips) of the original formula! I don’t think a lot has changed here aside from the fact the packaging is a bit more vibrant. Pick up one, maybe two but try to refrain from getting too many as many of the colors look the same once applied! If you desire a bit of moisture and a hint of tint you’ll be happy with this new range but those expecting a color lip butter experience will likely be disappointed.

These are available now at drugstores or grab them at Ulta.com.