Milani Fierce Foil Eyeliner are a Spring 2015 launch of cream eyeliners that will be permanently available in four shades. Metallic seem to be a big Spring trend particularly metallic eyes and Milani really embraced that this year with not only these eyeliners but the release of their new Eyeshines.

I think you might just be surprised how incredible these Milani Fierce Foil Eyeliners look on eyes!

Take a look below!

I should start out by saying Milani Fierce Foil Eyeliner won’t be a formula everyone loves but I have to admit, I adore these! These come in four shades each of which has a blacked base and what Milani calls a foiled finish. I honestly, don’t feel they are foiled or metallic in finish and the black base actually dominates the shade considerably so it’s kinda hard to tell the colors apart once they are on your eyes. These have flecks of gold and a bit of sparkle but as far as metallic or foil goes, well, that could prove disappointing as that doesn’t translate onto eyes at all.

This formula is somewhat of a hybrid that’s part powder, part cream. They are dense on the top layer and creamier as you run your brush through. The texture is interesting as it feels powdery but it’s also creamy at the same time! 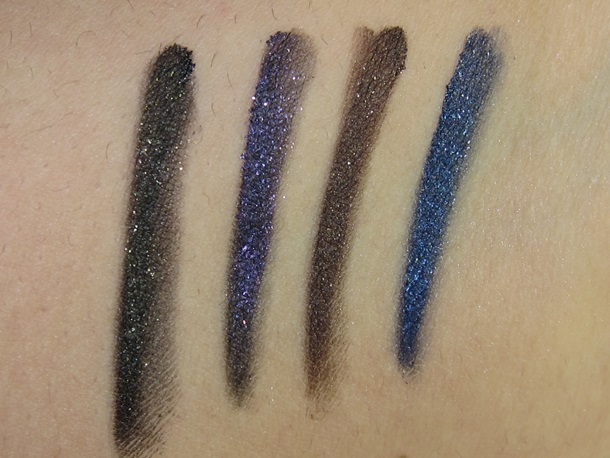 I have to line and reline my eyes with these as they apply sheer at first pass. They also have the same problem the Eyeshine Eyeshadows do which is the fact they never really set. On the upside, I have drier eyes so I didn’t have an issue with them smearing but if you have oily lids they will likely be a disaster! I can see these smearing, fading, and just being a major issue if you have oily lids. For myself, I got around a six hour period of wear from them before the color faded a fair bit. During this time I didn’t notice them smearing thankfully but during the application they do kinda smear across your lash line as you work which makes it difficult to get a super straight line, they are kinda slick! You can kinda see how my liner is a little wonky…! On the upside, I have to admit, I love the way they look on my lids. They have a super high maintenance formula that most people are going to hate but I think they look pretty darn amazing once I applied them as you can see below (or at least I think they look great).

In the end, Milani Fierce Foil Eyeliner are likely best a pick up when they are on sale but don’t pay full price for these! The formula is a mess and very difficult to work with but if you’re willing to put up with the drama, I must say, they look pretty darn beautiful on eyes!