Don’t quote but I believe Ripe Peach made a reappearance somewhere else prior to popping up in the MAC Toledo Collection….!

None the less, it’s back now and here’s my thoughts! 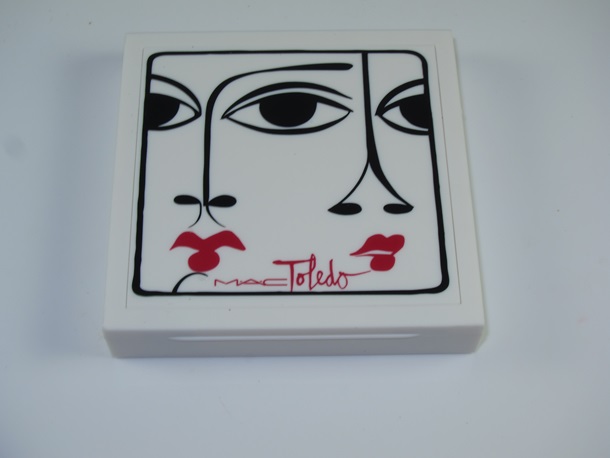 MAC Ripe Peach Blush Ombre ($32) comes housed in a white plastic compact without a mirror (that surprised me slightly). I have to admit I recall the formula being much nicer the first time around but still love this shade none the less.

The ombre design is stunning as it gradates from a golden peach orange to a lighter fine golden shade with shimmer. The color is a peachy orange in my opinion although MAC dubs it coral. I can’t recall the original formula being as dense but this is fairly dense. The surface is very smooth and hard but not dry. I had a hard time picking up color with my brush so I kinda had to stroke the brush across the pan several times. I think my swatches translate how very dense the brush is because they are quite light and sheer! This is actually a good thing because I feel like the shade can’t ever be over done. It blends and applies with a very pretty, well blended finish courtesy the density of the powder and the smaller amount you’ll pick up with your blush brush.

I don’t think it’s as pigmented as the original formula though and applies sheerer but still lovely the none the less with a luminous soft sheen on my cheeks!

I think you might find some differences in in the formula and on some level you might be disappointed at first because it is quite dense. But don’t let that fool you as MAC Ripe Peach Blush Ombre applies and looks positively dreamy on cheeks and face!