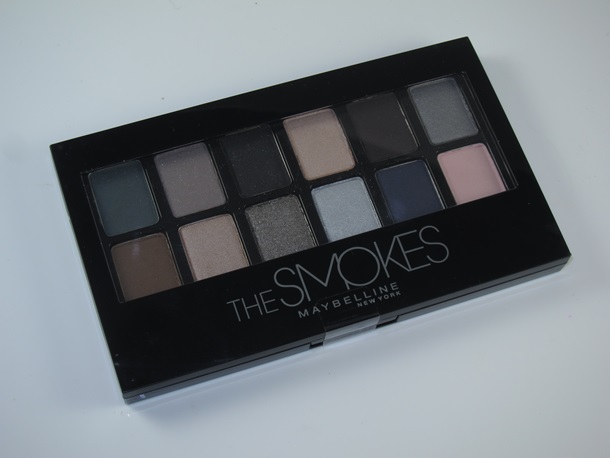 But I digress, let’s concentrate on the Maybelline the Smokes Eyeshadow Palette for now.

Here are some thoughts! I’ve read a lot of different thoughts on the Maybelline the Smokes Eyeshadow Palette and most are satisfied with its performance. Many hail is for being so cheap ($11.99) but I’m of the mentality that even if something is cheap it shouldn’t skimp on the formula and unfortunately this skimps on the formula big time.

The palette is arranged in the same way as the original Maybelline the Nudes Eyesahdow Palette and comes housed in a black compact featuring a diagram on the back that give eye shade combinations. The palette is either split into four quads up and down, three trios across, or six duos across and up and down. They suggest using creating looks using these groupings of either four colors per look, three, or two. I like the variety, I like the way they easily set up shades together to create looks so it takes a bit of the guess work out of pairing colors (you can see what I mean in the photo below). The funny little thing about these new 12 pan eyeshadow palettes is that they are fact newly designed. So visually you’re getting something that Maybelline has never done before! I’ve never personally seen a 12 pan palette from Maybelline and it’s kinda rare for mainstream brands such as Maybelline to do one. Unfortunately it’s the visible aspect that’s the only new thing because the formula has not changed. What you get here is the same formula of the regular line of Expert Wear Eyeshadow Palettes and in my experience those are formulated with a dry, dense texture and thus the Smokes Eyeshadow Palette suffers much of the same. 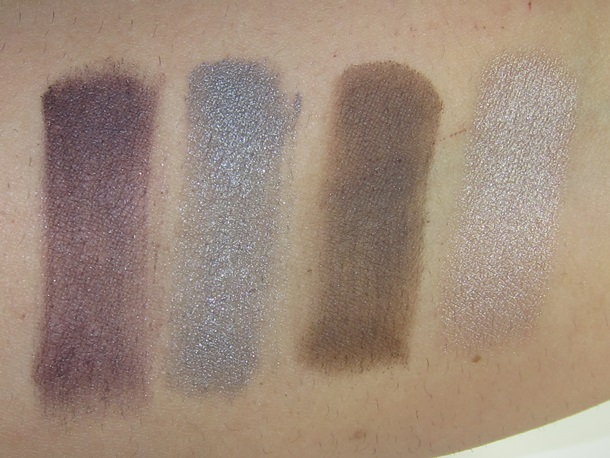 This palette is filled with traditional smoky shades such as gray and black as well as a few tans, navy blue, plums, and taupes. For me it was a little bit of an odd collection of colors that don’t really pair up well together. I mean in one spot you’ll have a silvery gray taupe and in the same palette a really dark matte navy. It’s slightly confusing! The palette has several finishes but matte does seem to dominate with some satins and semi-matte shades. Out of the 12 shades I only thought one was decent which was a blackened gray that had a velvet-like texture. All the other shades particularly the mattes had a dense very dry texture that made for patchy blending. I experienced the same with the Nudes Palette so this doesn’t surprise me.

I think the palette is exciting. It’s something we don’t commonly see from brands like Maybelline. It would have been great if they took the time out to reformulate the shades though because as of now you’re getting what you’d get from the normal Expert Wear Eyeshadow range. If you like that range of shadow you might just think the Smokes is great. Personally, I think the shadow formula needs a lot of improvement. It’s dry, dense, patchy, and just not very pleasant to use.

I’d recommend skipping the Maybelline the Smokes Eyeshadow Palette especially if you disliked the Nudes as nothing as improved.