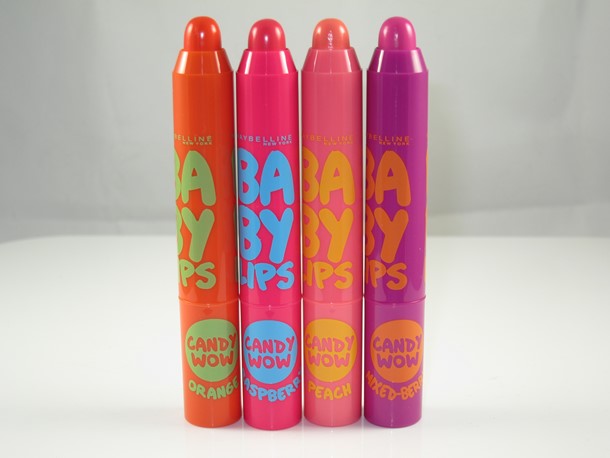 Why? Because they hold less product than a regular Baby Lips Lip Balm yet they’ll cost you more. Shrug! Go figure! Here in the US you can purchase a Baby Lips Lip Balm for around $3.19 and it holds 0.15 oz of balm. Now Maybelline Baby Lips Candy Wow Lip Pencils hold 0.07 oz of product and will set you back $6.50 each on Sasa.com. And if and when they hit the US market I imagine they’ll be around that price or perhaps more in locations like Walgreens and CVS with a guess-timated cost of $6.99 to $7.99 each. So less for more is the order of the day with these but that won’t prevent Maybelline from selling plenty of these. Why? Because they are cute! Because chubby lip pencils are an undying trend and people, including myself, love ’em! These come housed in a twist up pen design with a smaller rounded tip for application. If you purchase these from Asia (I can’t speak for the Australian ones) please do not travel with them. I purchased four shades and all four had cap issues. The caps are very loose and they pop off easily if you toss them in your tote or makeup bag! If you travel with them you might want to place them in a plastic baggie just in case they open during your travels!

So is the formula the same as the original Baby Lips Lip Balms? Kinda sorta! These have a bit more pigment compared to the original formula but not a lot more but aside from that there isn’t much difference. They do have more of a balmy consistency than the actual Lip Balms with a slightly shiny finish that wears for around two hours before fading. During that time they provide lightweight moisture and lips feel nice and soft after use. I read a good deal of reviews that claimed they had an overpowering fragrance and flavor (each shade has a different flavor) but since I got mine from Asia and most of the reviews I read were from Australia perhaps the formulas differed as I didn’t feel like they had all that much of a flavor. The Peach shade had a light barely there taste of peach and the Orange was likely the the shade that had the most flavor but the other two berry shades really had no flavor at all. Makeup hack alert! If you’re feeling daring you can slice a little bit off the tip of the pencil and this actually will give you more color. I unintentionally discovered this when the cap of mine popped off in my makeup bag and a slice came off the tip.

Maybelline Baby Lips Candy Wow are a more expensive yet really cute variation of the original Maybelline Baby Lips Lip Balm formula. Whether or not you actually need to indulge is entirely up to you! I thought they were cute but like Baby Lips Lip Balm they failed to wow me formula wise. Granted they provide a nice hint of color and some light moisture but aside from that there isn’t a lot here that sets them apart in a sea of chubby lip balm pencils!

Maybelline Baby Lips Candy Wow or not yet available in the US but sasa.com sells all the shades should you like to order them!