The Tarte Light of the Party Collector’s Makeup Case ($59) is a limited edition Tarte Holiday 2015 Gift Set that includes essentials for eyes and cheeks to create a gorgeous Holiday look! The Light of the Party Collector’s Makeup Case is actually one of several larger sets that Tarte launched for the Holidays. It’s a long standing tradition for Tarte to launch sets like this which cause quite a fair bit of excitement and happiness because hey, who doesn’t love massive makeup palettes from their favorite brands around the Holidays right? Tarte Light of the Party Makeup Palette ($59) includes 30 eyeshadows, 1 blush, 1 bronzer, 1 highlighter, mascara, and a dual sided brush for application. If you’re comparing it to the Tarte Greatest Glitz Collection it does in fact have a bit more product but I actually liked the Greatest Glitz Collection a little more because it contains more blush and I’ll likely use blush more than bronzer and highlighter. I also liked how the other set broke down into three different smaller palettes which had coordinating shades that worked together.

The makeup collection comes housed in larger sequined zipper cased. It’s very pretty, very glitzy, and bling-y but sadly not reusable. The case is split into two halves with one side holding a removable palette and wells for the double ended brush and mascara and the opposite side holding a tray with the eyeshadows. It would be so cool if both of these trays were removable so I could use the case once I’ve used up the makeup. But sadly the trays are glued in rather tightly. I think part of what made Tarte’s Holiday Palettes so appealing was you always got an extra makeup bag, purse, or case you could reuse. Sadly, that didn’t extend to the Light of the Party Collector’s Makeup Case. So as pretty as it is, it is unfortunately not reusable in the future. As nice as the packaging is you’ll find it proves difficult to store and travel with. It also isn’t hinged so it lays flat open which makes it difficult to use in smaller spaces. I wish it stayed propped open and didn’t fall flat open. This is also a pain because if you’re using the mirror (the mirror is hidden beneath the removable compact) inside the palette to apply makeup you’d have to prop it up against something to keep it in an upright position. As I mentioned there’s a removable palette here which is about the size of a CD and it contains The blush, highlighter, bronzer, and six shades of shadow.

Tarte’s palettes have also gotten a good deal smaller as well. Yes, they have a variety of products inside each with tons of different colors but where as before you were getting ALL full size shadows they have been decreased dramatically in size to 0.024 oz in size. So essentially you’ll getting a lot of variety for your money but you’re also getting smaller sizes of it. For $10 more it does contain a good deal more product that the Greatest Glitz Collection so if you want MORE Tarte you’ll likely want to pick this set up. If you prefer blush I think you might like the other set more as that contains more variety for not only eyes but cheeks and lips where as this set is limited to cheeks and eyes only. Tarte, like many brands, seem to have quality control issues with their eyeshadows in these bigger palettes. I like Tarte’s eyeshadow because it is soft, silky, easy to blend, and perfect for my drier, finely lined eyes. Tarte is not comparable to brands like Urban Decay and Too Faced. Their eyeshadows are not loud, bold, and pigmented. Their eyeshadows are soft, silky, and give eyes a more natural pretty finish. As I said though some of their larger holiday palettes have control issues and the Light of the Party Collector’s Makeup Case falls victim to that. Many of these shades are lovely but some such as Tartetini, Peach on Earth, Cocoa What Fun, and Midnight Kiss are very dry and blend very patchy. The darker mattes seem to fall victim to be using as eyeliners only versus all over eyeshadows because they apply so patchy. I also felt like many of the mattes were drier and not as silky as what I’ve come to known and love from Tarte. 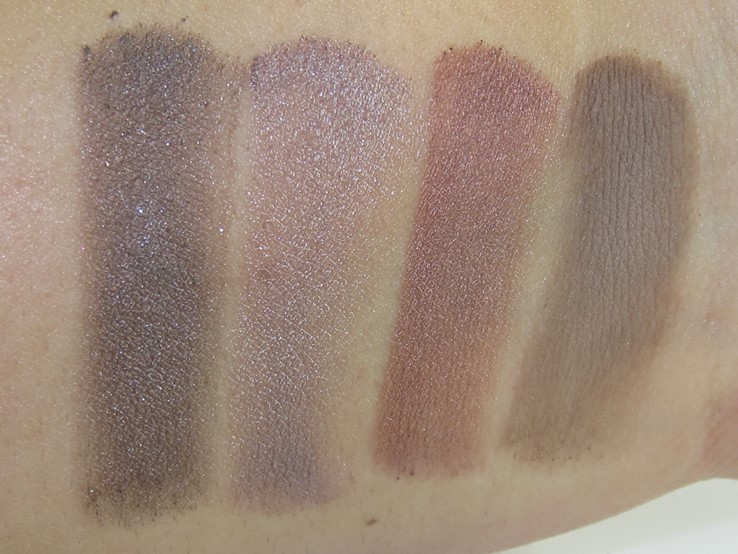 Yule Be Surprised and Mulberry & Bright The palette is filled with a variety of finishes including metallics, satins, and frosts but mattes do dominate. I have my issues with matte eyeshadow but Tarte is a brand I’ve come to trust for creating excellent matte eyeshadows but I think many of these mattes in this palette fall short of Tarte’s typical outstanding formula.

There are dupes to be had here as Tarte tends to follow the same route with many of their Holiday palette and that includes softer creams, beiges, taupes, shimmery golds and beiges, browns, and a few plummy shades. I wouldn’t say any of the shades are exact duplications but once applied you’ll find many of the shades look the same as ones you likely already have.

I think along with the shadows the Tarte face products also aren’t quite the same as their full size. The Amazonian Blush in this palette is called Amazed and it’s a light medium pink shade which wears for about eight hours but not longer twelve and over wear I experience from full size Tarte Blushes. This formula is dense yet highly blendable and silky. Social Butterfly is a light tan with softer pigmentation and a dense formula that’s silky and blends easily with a wear of eight or so hours. And Pink Champagne is a frost pinky beige highlighter that tends to cling to drier areas so be sure to blend well with this one.

Tarte includes a dual-ended mini eyeshadow brush in this set which has a slanted eyeshadow brush on one end and a fluffier blending brush on he other. I found the brush very helpful for application and can see myself using it often outside of this set. It had soft bristles with no shedding issues. I have reviewed Tarte Lights, Camera, Lashes Mascara often on my blog so I won’t get too deep into a review on this one. This is a deluxe size and one of my favorite mascaras that provides great length, and fullness to my lashes. Wearing Amused Blush and Eyeshadows in Eggnog, Party Favored, and Miracle of Light

Tarte Light of the Party Collector’s Makeup Case is a mismatch of formulas and not exactly a great representation of the brand. I sound very negative here so I do want to say there a lot of very wearable shades here for girls or guys that like more subtle, natural makeup looks. I liked a lot of the eyeshadow shades here and I can see myself using them in daily looks. What I don’t like is that there’s a bit of quality control here with some of the eyeshadows and the formula isn’t quite what we know and love from Tarte.

Do you own the Tarte Light of the Party Collector’s Makeup Case?

The Tarte Light of the Party Collector’s Makeup Case is available now at Sephora and Sephora.com.