Each of the eight Moisture Lock Oil Infused Lip Treatment flavors/fragrances is infused with a different nutrient oil that treat a specific concern. Ok, wait, what? You had me at lip oil but aside from dryness, flakiness, and general chapped lips what else other lip concerns could a person have? Mmm maybe finer liners? Ok, tell me more…

So it breaks down to 8 fragrances (Milani calls them fragranced but not flavored but they do in fact have a flavor just a heads up for the sensitive users):

No one likes variety more than this girl and I know it is going to really hard and really tempting to just pick one of these but I promise that you do not need every single formula, flavor, and shade.

There’s such a thing as over marketing and Milani Moisture Lock Oil Infused Lip Treatment definitely over markets their new lip oils.

Milani Moisture Lock Oil Infused Lip Treatment are really a fun and exciting idea. As a girl who struggles with chapped, drier lips (especially in the Winter) I was quite excited to check these out! At a glance I was thinking moisture, a little sheer tint, nice shine…..! And yeah, you get SOME of that but not all of it.

Each of these comes housed in a chubby 0.10 oz tube with a HUGE, GIANT sponge applicator. Remember MAC Wonder Woman Lipglasses from the MAC Wonder Woman Collection? Or the Hard Candy Glossaholic? Remember the big old applicators those came with? Well, Moisture Lock Oil Infused Lip Treatment has an even BIGGER applicator! Like five times the size of a normal sponge! I actually like applicators like this as MAC and Hard Candy both proved these saturate well with color. Unfortunately, Milani’s applicator is a little too large and saturates with the oil a little too much. So much in fact that more than half the gloss is gone from the tube when you remove the wand. Seriously, the tube is like a half full after removing the applicator! It’s crazy! On that note I will say the sponge is easy enough to use and it applies the product just fine to lips. 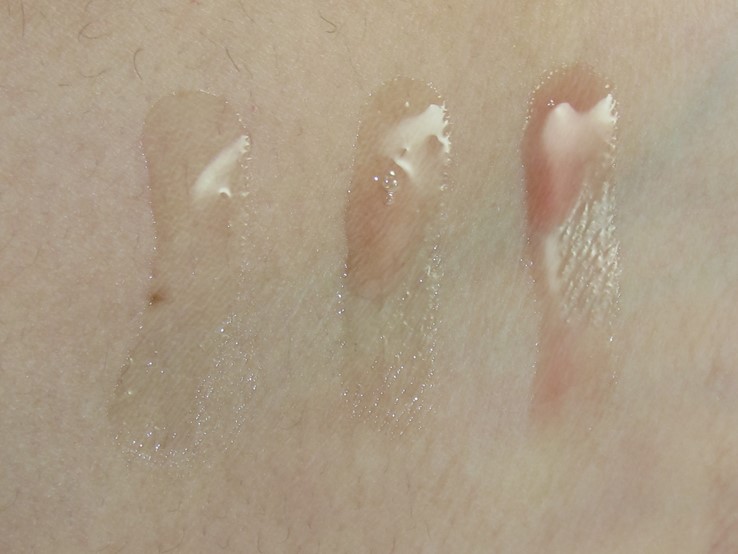 I personally purchased three shades because these are new and I couldn’t wait for reviews and I have no will power and I have a collect them all kinda disease with makeup, etc…etc….Lucky enough I was able to stop at three because I’d be kicking myself if I purchased all of them as this is not really all that great a formula.

Shine? Check! These have a very nice, shiny look on bare lips but they don’t produce as much shine over lipstick however, atop a lip stain they give a nice shiny finish. Color? Nope! No color here! I purchased clear Almond Coco, Pomegranate which also applied transparent, and Grapefruit, again, clear. I didn’t even get a hint of of tint from the two “colored” lip oils I purchased. That’s ok though as Milani does not mention anything about a tint with this formula!

So let’s see I got the protecting, moisturizing, and revitalizing formula. Does my lips feel protected, moist, and revitalized? Not really. They give lips a nice bit of light hydration and great shine but I wouldn’t say they are a super hydrating lip oil. If you want moisture you have to shell out the big bucks and get yourself some Hourglass No 28 Lip Treatment Oil, I promise it’s worth the money! These do each have a different flavor which was pleasant enough and quite light, nothing too heavy. With something like “moisture lock” and “oil” in the name one would expect a little more moisture from this formula. I can’t say how they compare to Clarins Instant Light Lip Comfort Oil as I haven’t tried that formula. But my experience with Milani Moisture Lock Oil Infused Lip Treatment was just ok. Nice shine here, light moisture, but not a formula that super dry lips will take joy in.