I was actually pretty excited about these shades even though I’m not typically a fan of bronzer or contouring. Not that these are bronzer shades but they are pretty orange-y and darker which is not something I’d typically reach for! I’m more a golden peach kind of girl myself. If you have a little or a lot of know how with contouring some of these shades will work at creating excellent shadowing around your face. Personally, I smiled, and dabbed on the apples of my cheeks as a blush color. But they do multitask as contouring tools as well as to add color to cheeks. On me, they look very meh because my application method isn’t exactly spot on but many Insta-celebs have been using them to create some fiercely chiseled cheek bones with the shades! If you’re matte blush lover right off the bat you’re going to love these shades as none contain glitter, shimmer, or sparkle of any kind. All four have a very dense surface but you’re able to pick up color very easily when a brush is stroked across the surface. I notice a lot of the newer Amazonian Clay Blush shades have a harder surface than the originally launched shades but that doesn’t prevent them from applying easily. Many of the shades either an orange or tan undertone that adds a lot of warmth to your complexion. I think many won’t work well for fairer skin or paler skin tones! You’ll want to swatch them before committing to a full purpose as I don’t think they’ll work for all skin types and tones. Tarte Exposed Amazonian Clay Blush is dubbed a nude pink but personally I find it to be a very muted tan pink. It looks positively uneventful in the pan but actually applies a lot darker than it looks. It’s very dense but still provides plenty of color on a single brush stroke and it blends flawlessly onto skin. The color applies very evenly and smoothly without adhering to drier areas. It looks like a natural peachy pink on my skin tone and will make for an excellent work friendly, “safe” blush shade for daily looks. Tarte Risque Amazonian Clay Blush is called a peachy nude by Tarte but I thought it was more of a neutral tanned peach with an orange undertone. This is also a very firm, dense consistency but still manages to be picked up easily with a brush. I thought it was easy to over do because the shade applied rather strongly and harshly on me when I mistakenly didn’t tap my brush prior to application. Start slowly when applying this and build as needed. The color adds a good deal of warmth to my complexion and looked incredibly smooth and flawless when applied and blended out. Tarte Seduce Amazonian Clay Blush looks a lot like Risque even though it is dubbed a rosy nude. To me it appears to be a light tan pink in the pan and applies a little sheerer than Risque but the colors appear very similar on my cheeks. The surface is the hardest of the three shades but again, I feel like this benefits the application since it applies very smoothly and flawlessly with a natural finish. 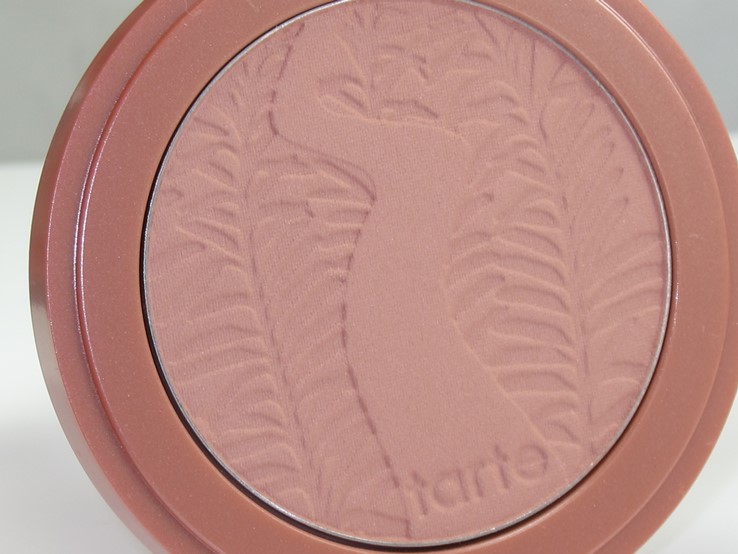 Tarte Sensual Amazonian Clay Blush is the shade I leased liked. It’s described as a golden nude but personally I felt like it was a light duller tan. It’s very dense and I had a hard time picking up color with my brush. It did blend easily but I felt like it gave my complexion a duller finish sadly. The Tarte Naughty Nudes Amazonian Clay Blush is an interesting round up of shades. I find the dense formulas actually work in my favor as they seem to pick up just the right amount of color for a flawless, natural finish. Color looks smooth and even on my drier cheeks and the shades add a certain warmth and depth to my completed looks. I think they’ll play a better role in the hands of a person way more experience at makeup artistry than me as these can be easily used as a contouring look to create beautiful nude looks! Don’t pass them by in stores as I see people potentially swatching them and feeling they may not be worth the splurge. It’s in the application where the real magic happens as some of these shades look incredible on even though they don’t swatch exactly great!

Tarte Naughty Nudes Amazonian Clay Blush are available now at tarte.com as well as at Sephora.com and Ulta.com.