Maybelline Gigi Hadid West Coast Glow Matte Lipstick ($8.99) are a new range of limited edition matte lipstick shades that launched in collaboration with Gigi Hadid. There are actually six total lipstick shades three of which are inspired by the West Coast all of which are vibrant reds and three others inspired by the East Coast which are all natural nudes. Does anyone think that the reds should represent the East and the nudes the West? Or is that only me!?

None the less, west or east, I hauled two of these shades to see what the good word was.

Here’s my review and thoughts! Maybelline Gigi Hadid West Coast Glow Matte Lipstick are $8.99 each and 0.15 oz in size. Depending where you shop Maybelline Lipsticks this is about the equivalent of a Maybelline Creamy Matte Lipstick as those typically, without a sale, range in price from around $7 to $8 at stores like Ulta and Walgreens. Although, they are even cheaper at locations such as Walmart, Amazon and Target at around $5 to $6.

The main compliant about Gigi’s Collection was that some of the items were priced a good deal higher than products from the permanent collection. I wouldn’t say the West Coast Glow Matte Lipsticks are crazy expensive or too badly jacked up in price compared to retail price at Walgreens, CVS, etc…. However, if you shop for your makeup at Target, Harmons, Walmart, etc…you’ll def feel like these are a bit more than your average Maybelline Lipstick. These come housed in rather gorgeous packaging. Whether you like Gigi or you don’t you can’t deny the packaging is quite lovely. They pale nude pink barrels with Gigi’s initialized signature on the front is very pretty. Helpful tip: If you’re not keen on her signature but love the nude pink barrel you can use nail polish remove to remove her name from the barrel very easily! That way you’re left with a completely nude and pretty lipstick that you can display on your vanity.

One of the nicest aspects of the trio of shades is they release just in time for the Holiday season as the color range is a nice round of festive reds. I’m in love with Lani (GG24) which is a gorgeous ruby red that reminds me of Bite Beauty VIB Rouge. It’s a gorgeous, vibrant, incredibly pigmented red that delivers full pigmentation on a single swipe. I also purchased Khair (GG23) which is more of a traditional cherry orange red. It’s equally as pigmented on a single application. Sadly, they look the same on my lips because I fail so hard at taking photos but I promise they are a bit different in “real life”. 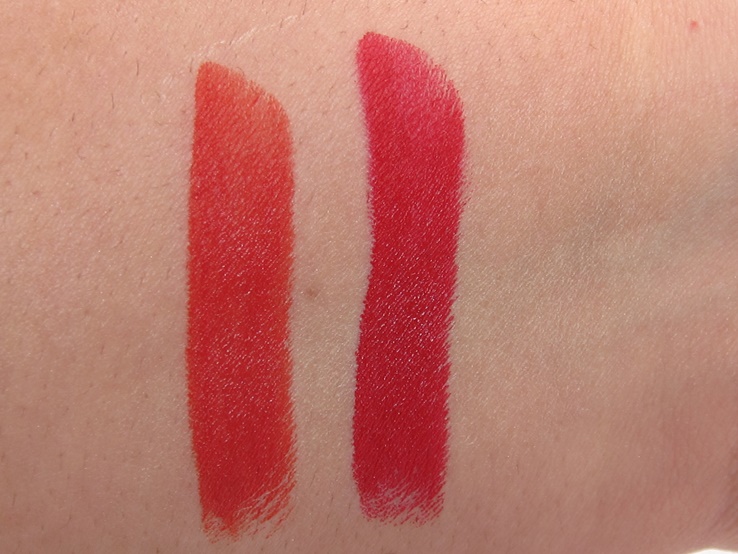 Maybelline markets them as creamy matte finish but I wouldn’t say the formula is like the Creamy Matte Lipstick range. They are a little heavier, a bit more matte in finish, and a touch drier. They apply very smoothly with a smooth, even matte finish that wears comfortably on my drier lips for about six hours. They aren’t hydrating and are a bit dry but nothing that terribly uncomfortable.

All in all, a very beautiful selection of festive matte reds that apply well, wear long, and have crazy good pigmentation.

If you see them, buy them, you won’t be disappointed.