So you geared up for the new Tarte What Has Your Makeup Done for You Lately QVC Today’s Special Value? Some of you already got your sets! Sneaky little buggers swiping it up quickly eh? Tarte What Has Your Makeup Done for You Lately Set launches this Friday on QVC.com and includes two options for purchase. You can order it as a one time shipment and receive all of the following goodies: Or you can order it on QVC Auto Delivery which means they will ship you new seasonal shades of the collection in November and again in February.

I’ve blogged earlier this morning about the fact that the next sets will not include the brush but instead you’ll get a full size bronzer in the second shipment and a finishing powder in the last.

I really love the fact that Tarte goes with a little variety in their TSV Sets. I’ve ordered many sets from QVC like this in the past from a variety of brands but Tarte is one of the only ones that took the initiative to give us little changes in each kit. Typically it’s a different makeup bag or brush but with this set you’re getting an entirely new product in each kit. That’s rather brilliant in my opinion.

This is considerably smaller a set than Tarte’s put out before. It also lacks a lot of color in my opinion. Past sets relied on eyeshadow and blush where as this seems to concentrate on more basic makeup products.

But essentially you are receiving several full size products here so you can’t really beat the price. You’ll also be privy to the worldwide launch of the new Tarte Maracuja Miracle Foundation Broad Spectrum SPF 15. I’ve already reviewed the foundation in a separate post so I won’t be discussing it here. Tarte also includes a brush for application of the foundation. I haven’t actually tried the brush yet in conjunction with the foundation. I’m more a finger girl when applying base! 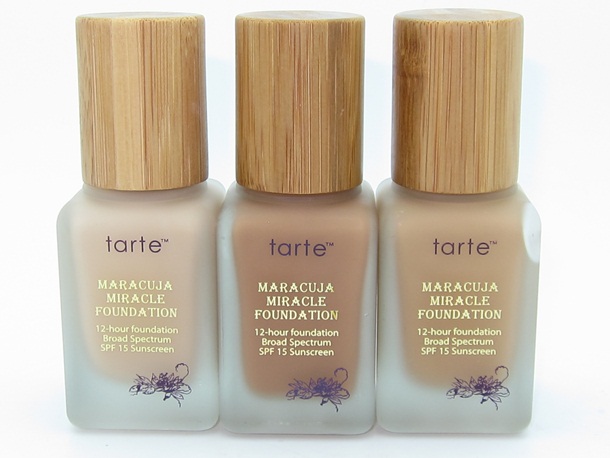 Many of the products in this launch are exclusive to QVC until September/Fall 2012. You also get a generous sample of Tarte Maracuja C-Brighter Eye Treatment which will be available along with the Tarte Fall 2012 Collection. Other products such as the foundation ($42) and Maracuja Rollerball ($22) will also launch in Fall.

As you can see the above prices of both the rollerball and foundation outweigh the set’s $49.96 price tag so there is a value to be had here.

One of the first products I’d like to address is the Tarte Lipsurgence Lip Shine. This does in fact have a bulky sharpener attached to the pencil. Some of you took the time to contact Tarte about this packaging and express your dislike. From my understanding the replies you recieved about this was that Tarte would not be changing the packaging on their Lipsurgence. So thankfully, this is a one off.

I realize the sharpener is bulky and a bit clumsy but I do like the fact I can sharpener the pencil to a point as it wears down. This option isn’t available in the current line of Lipsurgence Pencils. You can swivel them up and down yes but you can’t get back that precise point once it’s worn down. So in some ways I do appreciate the sharpener just not the bulky way they choose to include it. I think we can all agree there are far neater ways of doing this. The shade you’ll get is Smitten which is a soft, mod-ish pink. The color is surprisingly wearable for me as I don’t look too lively in mod pink shades. It has a good deal of tint to it and a nice shiny finish with a moisturizing feel. The formula is a lighter texture than the Lipsurgence Lusters with a bit more shine to it and less of a balm-y texture.

Tarte ModernEYES Waterproof Cream Shadow/Liner Duo includes a taupe shade of purple eyeshadow and a plum liner. The colors are listed differently on QVC’s site but my interpretation of the shades is definitely purple and plum. The shadow has a similiar formula to the Tarte Eye Candy Waterproof Amazonian Clay Shadows but lacks the pigment and creaminess of those pencils. It’s a little dry but that’s not necessarily a bad thing if you have oily lids you’ll appreciate it. It doesn’t tug during application and has an easy enough glide with sheer to medium color pay off. For the best intensity you do have to build the color up. The liner shade is creamy as well and has an easy, smooth glide across the lash line as well as the waterline. The colors compliment and play off each other nicely. For my look I accented with the liner on my lower lash line and waterline and placed the shadow on my lids. To complete the look Tarte includes their Amazonian Clay Smart Mascara. This is my first use with the mascara and I like it. It has a straight line, bushy brush. It offers nice length and a good deal of volume as well, see my before and after photos below. Two products I do want to rave hard are the Tarte Maracuja Oil Rollerball and new Tarte Maracuja C-Brighter Eye Treatment. I have to say I love this rollerball. I don’t see any great benefits from using Maracuja Oil outside of the fact it hydrates and moisturizers very well which is appreciated by my drier skin. One of the things I love about the rollerball is it makes for such nifty application under my eyes. Don’t get me wrong, I appreciate the dropper method in the full size but the rollerball is really great for the under eye area. I think the rollerball also enables me to use the oil in the AM as well if I want as it distributes just the right amount of product without leaving me oily. Tarte Maracuja C-Brighter Eye Treatment is a little something extra Tarte includes in this set. They don’t even mention the sample on QVC’s site but no worries, it’s in there. I’ve been using it daily for a few weeks now, yes weeks, it’s a nice 2.5g size. This is infused with Maracuja Oil and has a thicker eye cream consistency. Don’t be worried about the thickness as it absorbs easily and a little goes a very long way for hydrating under the eye area. The formula supposedly works to brighten eyes while diminishing the appearance of finer lines. I haven’t noticed the brightening effect but I love how moisturizing this is and look forward to indulging in a larger size. So yes, I admit, Tarte What Has Your Makeup Done for You Lately might be a little uneventful compared to past collections. But take a closer look and you’ll find a lot of little things to love about this set. The price, the nifty rollerball for using under your eyes, the generous eye cream sample, and all the essentials for a healthy makeup look.

What more could you possibly want for just shy of $50? The Tarte What Has Your Makeup Done for You Lately Set is available now at QVC.com and will be officially premiering on QVC this Friday and all through the weekend.

Did you already pick it up?

What are your loves about the set?