There are new Covergirl Eyeshadow Quads for Spring 2015 popping up at drugstores! They actually have three color variations available for these new Covergirl Eyeshadow Quads which makes for a rather small release. I’m wondering if they are permanent or limited edition but my gut tells me they are likely permanent and will get a larger launch with more shades as we near the new year.

These are interesting because they look a lot like Maybelline Eye Studio Plush Silk Eyeshadow Quads and also because they are actually pretty nicely formulated. Sorry to Covergirl fans but I’ve always found their shadow formula very dry but these are completely a reinvention and very much like the texture and formula of Maybelline’s version. My logical side, yeah sometimes I have one, says well, do I really need another rendition of Maybelline Eye Studio Plush Silk Eyeshadow Quads? For starters Maybelline has their quads available in a range of gorgeous colors where as these new Covergirl Eyeshadow Quads are only, thus far, available in three shade selections. Secondly, the formulas and even some of the shades are identical to quads I already own from Maybelline. So yeah, address your logical side and ask yourself, “Do I really need these?” before you get too excited about the launch. I think Covergirl could potentially gain my attention if they release newer shades I haven’t seen from Maybelline though so that’s one thing!

My non-logical side? Total squealing because I really love the idea behind these, the formula, the packaging, everything! Even the price ($6.79 at Harmons) is nice. When I originally tried the Maybelline ones I had said they reminded me of Japanese eyeshadows, the Covergirl Eyeshadow Quads have the exact same plush, soft, velvety formula and totally remind me of Japanese Eyeshadows as well! I find the texture on these a little softer than Maybelline’s version. They are soft, almost creamy in consistency with lovely metallic finish. I think Maybelline’s formula is a bit more sparkly where as these have some sparkle but it’s more refined. I do find these have a powdery consistency so they tend to flake up and cause a good deal of fall out during application so sponge applicators are key to application in my opinion to minimize the fall out and to build the colors better. 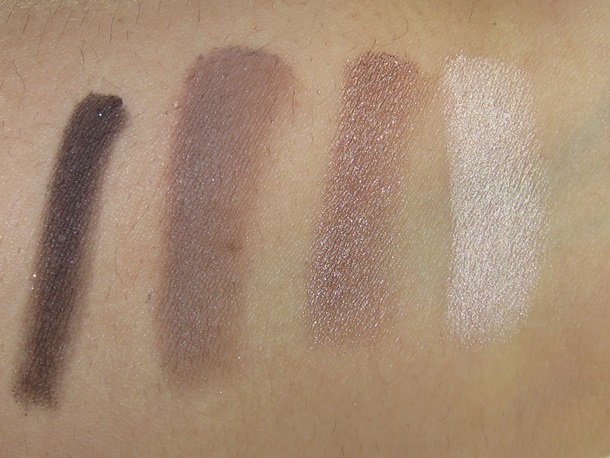 Some folks will love this texture, others will hate it. I personally love it. It’s soft and easy to blend although primer is necessary as the colors tend to crease and fade within a few hours but won’t do so if a good primer is worn under them. Each palette has four shades so you can use the lightest as a base, the medium shade on your lid, the darker in your crease, and the darkest as a liner or to define the outer V of your eyes. I love palettes like this as all the shades work well together and contrast beautifully. They also take the guess work out of pairing up colors which is always a plus for me.

The new Covergirl Eyeshadow Quads for Spring 2015 are a welcome addition to Covergirl’s Eyeshadow range in my opinion. I do look forward to more shade variations and will indulge further. Are they new and exciting? Not really…! But for Covergirl itself this is a new type of product and a great stride in the right direction to creating quality drugstore eyeshadows.

These are available now at drugstores.