The E.L.F. Snow & Ice Glow Eyeshadow Palette ($6.99) is a limited edition palette that launched with the E.L.F. Frozen Elsa Makeup Collection a few months ago.

Considering the E.L.F. Snow & Ice Glow Eyeshadow Palette has some very fun shades for Summer looks I decided to haul it out for a review and swatch session today! E.L.F. doing Disney makeup inspired collaborations for a while now but it’s nice to see how evolved particularly with the Frozen Collection. This collection and the E.L.F. Beauty and the Beast Collection are quite extensive as they now include not only the Lookbook Palettes and makeup sets but also a range of single makeup products like lipgloss, eyeshadow pots, and this nine shade eyeshadow palette.

I think the palette is adorable! It features a print of Elsa on the clear compact with little snowflake detailing. It’s really quite cute and reminds me of the Peripera Frozen Makeup Collection that launched in Korea!

The palette holds nine total shades of eyeshadow and is quite a nice compact size that will travel and store easily. The shades aren’t particularly Frozen or “snow and ice” inspired aside from the aqua and teal colors included. You get a round up of several different shade matches here that will work in trios in my opinion. There’s an aqua tea trio, a cranberry trio, a purple trio, and a cream and gold trio. The colors are a little mismatched at a glance but if you group them into twos or threes they’ll work fine together. 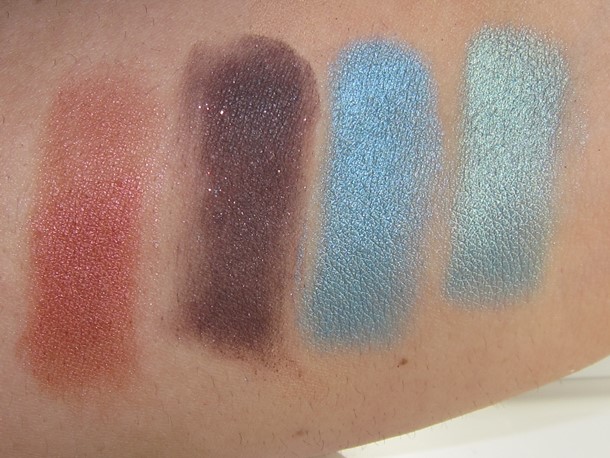 This is more a collector’s piece in my opinion which is great for fans of Frozen because the actual eyeshadow is rubbish in my opinion. I find the Look Book Palettes have a softer more buttery textured eyeshadow. The eyeshadows in the Snow & Ice Eyeshadow Palette are considerably drier and apply patchy on my eyes. I had difficulties building up color on my lids because as I blended they tended to sheer out and fade. Even with primer I noticed the colors didn’t wear long and tended to fade and lose vibrancy within a few hours of wear. I’m not particularly keen on the formula either as they seemed to drag across my lid due to the dryness. They aren’t chalky thankfully but they aren’t buttery or soft either which made for crummy application in my opinion.

I think E.L.F. did a great job with the Frozen Makeup Collection and I love they extended the collections to include new items but unfortunately, I’m not really impressed with some of these offerings. The E.L.F. Snow and Ice Eyeshadow Palette is cute but that’s sadly all it has going for it.

You can get the E.L.F. Snow and Ice Eyeshadow Palette and the entire Frozen Makeup Collection exclusively at Walgreens and drugstore.com.