One of the things that sets apart the Rainforest of the Sea Eyeshadow Palette from ALL the Tarte Eyeshadow Palettes you already own, love, and use, would be the fact that the formula has changed dramatically. Tarte went with something completely new, different, and exciting with their eyeshadow formula in this palette and I’m liking it, a lot. It’s a refreshing change to see a brand just randomly, out of the blue reinvent their eyeshadow palette. One would hope this formula is here to stay as it truly is great. Not that Tarte’s eyeshadow is bad mind you but I think this formula is even better than anything I’ve had the pleasure of trying from them in the past. The Tarte Rainforest of the Sea Eyeshadow Palette comes housed in a smaller size round palette that’s very similar to palettes Tarte has done in the past such as the Rainforest After Dark and Showstopper Clay Palette however, it is a bit smaller and more compact in size. It happens to be a little cheaper as well at $34 compared to $38 but sadly holds less product as well at 0.40 oz compared to 0.70 oz. Doesn’t matter though! The formula is so good you likely won’t mind you’re getting less.

Keep in mind this palette is limited edition so I’d highly suggest purchasing it before it disappears or even grabbing a back up if you really like it. 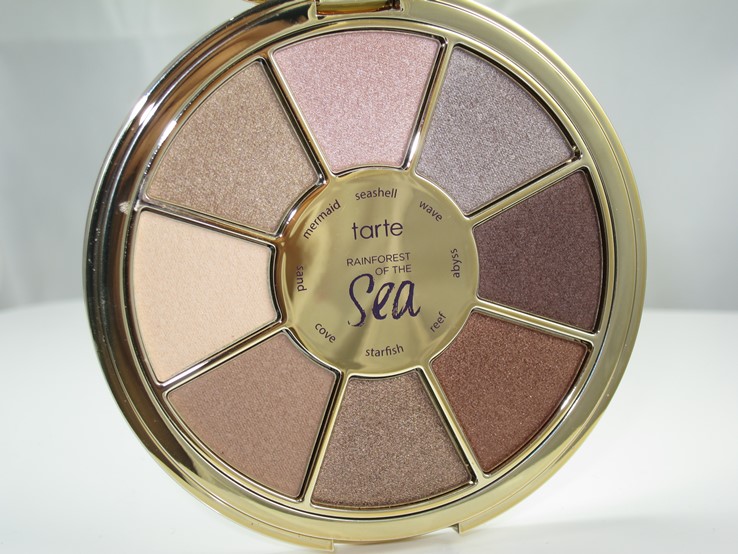 Tarte describes the formula of these shadows as plush, velvety eyeshadows with a hydrating finish that has a creamy powder consistency. They are considerably more dense compared to other Tarte eyeshadows which typically have a soft, silky or/and sometimes powdery texture. They remind me a little bit of the Make Up For Ever Artist Shadow however, I think the texture is much more soft and creamy in comparison.

I find the texture is a bit of a hybrid formula that’s part powder, part cream. The creaminess of the shades isn’t at all like say Stila’s Eyeshadow formula as you get zero frost or metallic from these shades. They feel very soft during the blending process and leave behind gorgeous wearable color that was free from fall out and remained very long wearing without creasing or losing color intensity. This formula is truly like nothing we’ve seen from Tarte in the past and I, for one, am liking what I see. I hope Tarte does more palettes with this formula as I think it could potentially revive and refresh their diehard fans as many of you might have reached the point of have a lot of repetitive Tarte eyeshadows in your collection.

The Tarte Rainforest of the Sea Eyeshadow Palette is an excellently formulated eyeshadow palette that comes as a little bit of a surprise to me. I’m not sure what I expected but a brand new formula was not it but I sure am glad I tried this one as it is quite delightful! The Tarte Rainforest of the Sea Eyeshadow Palette is available exclusively at Sephora and Sephora.com.