It Cosmetics Bye Bye Under Eye Concealing Pot ($28) is a “new” full-coverage concealer that recently launched with the It Cosmetics Fall 2017 Collection in six shade selections. I use the term “new” very loosely in this review because like the recently launched It Cosmetics Bye Bye Redness Neutralizing Correcting Cream this isn’t exactly new. It’s basically just seems like a re-promoted version of It Cosmetics Bye Bye Under Eye Corrector Concentrate but available in new shade selections as that formula originally launched in only three shades. I compared the ingredients (click here for the ingredients on the Bye Bye Under Eye Concealing Pot and click here for the ones on the Corrector Concentrate) and they look identical to me. However, oddly enough the corrector concentrate is still available as a purchase at ulta.com. Interestingly enough both pots are 0.17 oz in size but the new Bye Bye Under Concealing Pot is $28 compared to the Corrector Concentrate which is $38. I guess you can argue that the new version isn’t a correcting formula but a concealing one and that might be the main difference between the two but it just seems like the products are in fact the same just with a new shade selection.

None the less, here’s my review and swatches of the It Cosmetics Bye Bye Under Eye Concealing Pot. 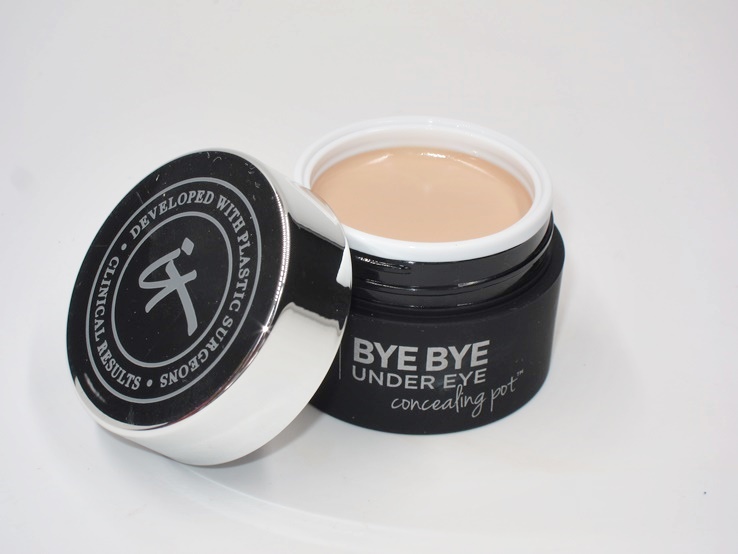 It Cosmetics Bye Bye Under Eye Concealing Pot ($28) is a full-coverage concealer that promises to have the same coverage as Bye Bye Under Eye Anti-Aging COncealer plus skin smoothing and line minimizing benefits in a lightweight formula that contains hydrolyzed collagen, peptides, hyaluronic acid, antioxidants, caffeine and green coffee extract.

This comes in a tiny jar and doesn’t include the little stand and brush that the Corrector Concentrate was sold with. It’s a dense formula with a emollient consistency which you’ll either really love or really hate. I always tell everyone if you like the original Bye Bye Undereye you’ll probably be ok with this formula but if you hated that formula you might not love this one. It actually reminds me of greasepaint or Halloween clown makeup. In terms of formula it reminds me of Bobbi Brown’s Concealer Pot or Bare Minerals Correting Concealer but it isn’t as creamy and much more thinner and emollient with a denser feel that warms up and gets softer. It does in fact provide very full-coverage. Pigmentation is intense so if you’re suffering from dark circles or tired looking eyes this will indeed fix those issues up easily. When I originally tried the corrector formula I thought it blended very easily under my drier eyes but this formula wasn’t as easy to blend. It’s fairly soft but it drags a bit during the application. Granted, I’m a little older now with more lines than I originally had when I reviewed it back in 2013! Hey, it’s either that or the formula changed slightly. I also didn’t have issues with creasing but this version did fall into my finer lines after about four hours of wear. I ended up looking a little tired, worn out, and dry after hour four because it caked up and creased. If you have oily lids the emollient texture might just work in your favorite as it’ll likely have an easier glide and it’ll “stick” without migrating or moving. However, drier skin might see it settle more into lines.

I think it’s a product you really have to try for yourself to see if it’ll work for you. It’s been years since I’ve used the Corrector Concentrate and I remember that it was a little easier to apply compared to this formula and it wore a lot longer without the creasing issue. This just seems a little too heavy for me but I’m sort of determined to make it work because it really provided excellent coverage and brightens up the eye area beautifully well. But I think aging eyes might require something a little creamier and I think that’s where I’m experiencing an issue.

It Cosmetics Bye Bye Under Eye Concealing Pot is available now at ulta.com.
Tried it already?