It Cosmetics Bye Bye Under Eye Corrector Concentrate ($38) is a full coverage corrector/concealer that contains some rather awesome ingredients like coffee extract, hylauronic acid, peptides, cucumber, avocado, and hydrolyzed collagen. Being rather a diehard fan of It Cosmetics Bye Bye Concealer I was all about trying this new corrector formula but a little worried after my recent foray with the new Tarte BB Tinted Undereye Corrector. Apparently correctors and I have issues.

Let’s take a look at It Cosmetics Bye Bye Under Eye Corrector Concentrate and see if I love it. Even though It Cosmetics Bye Bye Under Eye Corrector Concentrate is marketed as a corrector you can get away with using it as a concealer product as well if the Light, Medium, or Rich shade selection suits your skin tone.

This comes in a tiny jar with a lovely little brush for application and a stand much like the one that It Cosmetics Bye Bye Redness comes with. I think the packaging is so similar to Bye Bye Redness that I automatically assumed this might be a creamy formula however, it is a dense cream. Don’t get nervous when I say dense as it is creamy and very, very emollient. 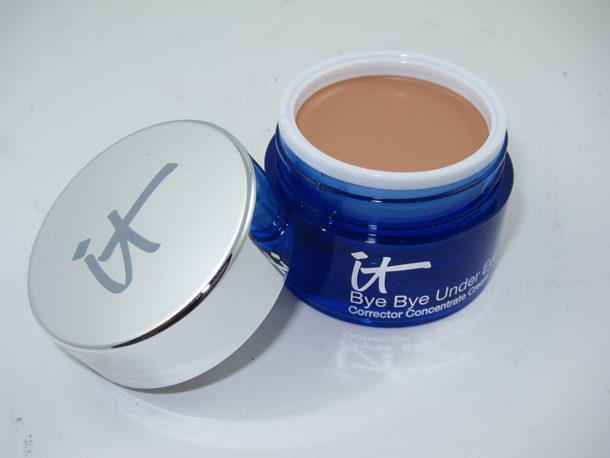 The Medium shade runs a bit too peach for me so the light was the better match. I typically use Medium in Bye Bye Concealer and Light happens to be close to it in Bye Bye Under Eye Corrector. The peach in Medium is a better corrector though as the peachiness will diffuse the appearance of darkness under eyes. This is FULL coverage so it will definitely tackle the most troublesome of under eye woes such as dark circles, discolorations like purple or blue circles and even shadows.

I guess in terms of formula this most reminds me of Bobbi Brown’s Concealer or Bare Minerals Correcting Concealer but it isn’t as creamy. It’s a bit dense to the touch but it warms up to a soft, emollient texture. It blends very easily under my drier eyes and once patted into place it sets for very strong, long wear. It doesn’t crease into finer lines nor does it cake. The smooth, soft finish looks fairly incredible. I use my E.L.F. Concealer Brush to dot it on and proceed to blend it out with a kabuki brush to a picture perfect airbrushed finish. I set with a small amount of Skin Food Dark Circle Powder but I find it wears just as well without. I think if you have oily eyes it should prove just as wearable as although emollient the texture clings to skin very well so it won’t wear away easily due to oiliness. Of course, the brush that comes with it actually is just as great as my beloved E.L.F. Concealer Brush! It’s soft yet has dense bristles works great to brush the concealer under eyes and you can just gently pat into place after! As with all concealer products you have to prep well prior to application especially if you have drier skin. I use plenty of eye cream and a smidge of Clarins Instant Smooth prior to application and all applies perfectly. I think the density of the product might prove a bit challenging during application if you eyes are showing signs of (or you already have) crepiness. Such an eye type might feel like the formula drags when applying.

It is Muse Approved.

I’d love to hear your thoughts it.