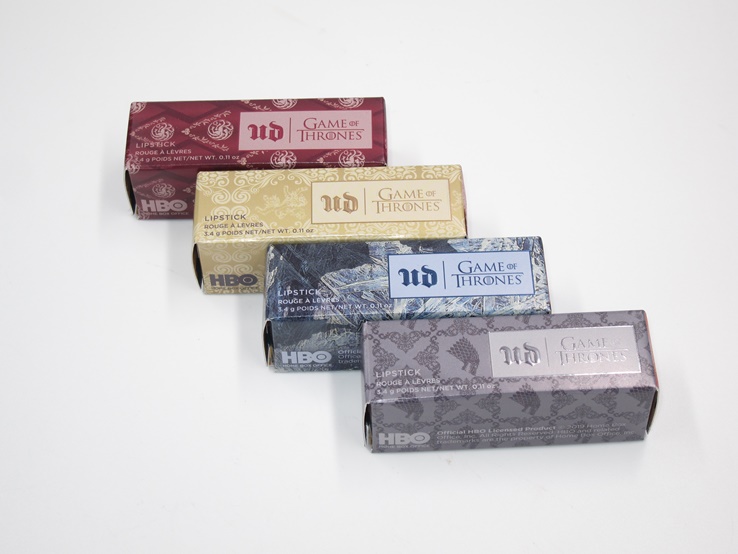 The fact that Urban Decay Cersei Lannister Game of Thrones Vice Lipstick ($19) is the only shade NOT sold out at sephora.com at the moment might just prove who we hated the most in the land of Westeros. Either that or the shade isn’t one everyone is digging at the moment.

I choose to believe we all just hate Cersei or do we love to hate her? She’s absolutely one of the coldest players in the game! You have to ask if Cersei’s villain-dry is pure evil or spot on genius. Will she be the one that remains on the Iron Throne after all is said and done? I realize most people are probably sitting there hoping for something awful to happen to her but what if she actually comes out ahead in this? That would be tragically funny and ironic. At this point her story has far surpassed the books and her personality is a little less erratic in the show but still selfish and evil. For her shade, Urban Decay went with a brassy metallic bronze. Perhaps a nod to her great Lannister heritage as it’s sigil is a great roaring lion or maybe a nod to her golden locks. Or maybe her courageous and determined spirit. If nothing else at all Cersei shows great strength, determination, and courage at many times from her crappy marriage to Robert Baratheon to her imprisonment by the Faith and her denial of wrong doings.

Did you buy her shade? Cersei’s not a character I personally migrate to but I do admire her at times for just being unapologetically a big old witch. Truly, the woman makes absolutely no apologize for the fact she’s just a horrible, crappy person. You gotta admit a chick who is who she is and isn’t sorry about it is pretty damn cool.

Her shade is pretty bold and rich so, I guess it is fitting. I can’t see Cersei ever wearing lipstick which means I’m having a hard time envisioning a shade for her. What would you choose for her?

Like the other shades in this launch Cersei’s lipstick is housed in a brassy gold barrel decorated with House Lannister sigil all around it. The outer box is the same design but inside their is a small map of Westeros. This color is a strong, bold brassy metallic bronze with a hint of red and copper sheen. It has excellent pigmentation with a smooth, easy to apply formula that was quite creamy with a tiny hint of shine. It felt lightly moisturizing and wore for about four hours on my lips but I struggled a little with the color feathering on my upper lip line a little bit. I wasn’t into the shade nor the metallic finish. It’s just really my shade! It kind of drowns me out but it’s one that a darker skin type will likely rock it hard. Cersei, you’re a mean one but some of us still like you anyway.

Urban Decay Cersei Lannister Game of Thrones Vice Lipstick is $19 and 0.11 oz in size. This is one of four, limited edition shades that Urban Decay introduced inspired by characters from Game of Thrones. The shade is a brassy golden bronze with a metallic finish that wore for four hours on my lips but did show some signs of feathering on my upper lip a bit. The shade was lightly moisturizing, with a creamy, subtly slick texture that glided easily onto my lips and had no flavor nor fragrance.

If you’re all about Team Villainess I’m sure Urban Decay Cersei Lannister Game of Thrones Vice Lipstick is on your wish list!