Revlon Super Lustrous The Gloss ($8.49) is a new, permanent lipgloss formula that launched in 12 shades for Summer 2019 that’s inspired by the Super Lustrous Lipstick Collection.

Super Lustrous The Gloss might easily be mistaken for the original Revlon Super Lustrous Lipgloss that got relaunched with new packaging back in 2013 with Emma Stone as the promo model. I know when I saw these I thought, “Oh are they repackaging again because of Gal Gadot?” I realized after trying them that they are a completely different formula compared to the Super Lustrous Lipglosses!

Revlon’s on a roll with new lipglosses this season that seem similar to the ones they already have like the recently launched Ultra HD Vinyl Lip Polish which are quite reminiscent of Ultra HD Matte Lip Color and Ultra HD Matte Metallic Lipcolor.

Rest easy though knowing that the Revlon Super Lustrous The Gloss is quite a different formula compared to the original Super Lustrous Lipgloss line. I also have no doubt that both glosses will remain permanent.

Revlon Super Lustrous The Gloss arrives in a circle barrel with a oversized flocked sponge applicator. The gloss is 0.13 oz in size and priced at $5.49-$8 depending where you purchase it. If you’re comparing sizes and prices, the original Super Lustrous Lipgloss is the same size and the same price point.

According to Revlon this is a non-sticky formula with a radiant shine and a moisturizing formula that contains Vitamin E and Avocado Oil. I selected two shades from the 12 available which I quite liked but I do hope they release more shades in the future. I love that brands are really getting into launching alternative shades and shades outside the norm we see like purples, hot pinks, even silver. However, I don’t really wear shades like that on the daily and this collection felt like it included more of those shades versus more everyday, wearable shades. I’d love to have seen more nudes in this formula, more roses, etc…! I hope they expand the line or maybe do some limited edition seasonal shade that are a bit more wearable for everyday looks. I got the shades Blissed Out and Indulge In It. Blissed Out is a golden peach that reminded me of NARS Orgasm and Indulge In It is a pretty reddish brown that will look great for Fall lip looks. Revlon Indulge In It Super Lustrous The Gloss 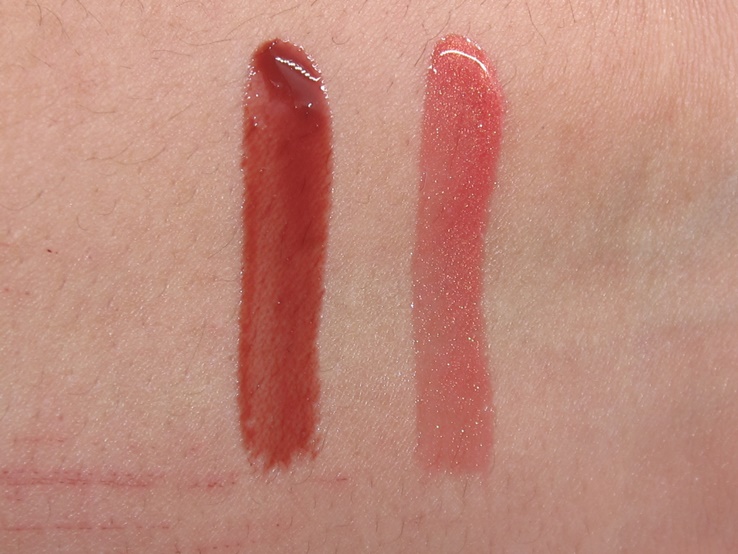 Compared the the original Super Lustrous Lipgloss formula these are thinner, sheerer, and much more moisturizing and not as sticky or tacky. The formula feels quite hydrating on my drier lips but does apply sheerer on the first application. I needed to built a little to get the best pigmentation as the gloss initially applies sheer enough that you can see my natural lip color. After building I got much better color pay off. It almost has a gel-like texture which hugs lips very comfortably without feeling gooey or sticky. The wear is shorter since it lacks any tackiness to keep it sticking to lips so, I can wear it for around three hours before it disappears. During that time it didn’t migrate nor feather and it did keep my lips pleasantly moist and lightly hydrated. It’s a very, very comfortable gloss to wear that provides plenty of shine and a nice bit of color when built up. I did detect a very, very subtle fruity flavor but not fragrance.

I tend to migrate towards shinier lipglosses formula and as much as I understand that some tackiness is the key to longer wear I don’t mind so much when a gloss wears shorter but feels more comfortable on my lips. That’s exactly what I get from Revlon Super Lustrous The Gloss. Nice color, great shine, and shorter but comfortable and hydrating wear. If you don’t mind the shorter wear these might be a great pick for you! I liked them a lot.

Revlon Super Lustrous The Gloss is a new lipgloss formula available in 12 shade selections that’s 0.13 oz and $8.49 to $5.99 per shade. I liked this formula a lot! It’s shiny, initally applies sheer but does build for better color pay off, and has a nice hydrating feel through the three hour wear. I think it could be a potential problem if you want a longer wearing lipgloss but if you don’t like the tacky, sticky formula of one you might just get on with this lighter, gel-like texture that wears shorter but provides a more comfortable wear than a stickier, longer wearing formula!

Revlon Super Lustrous The Gloss should be an easy pick for those who dislike sticky, tacky glosses! This is lightweight, hydrating, and very comfortable to wear!