I purchased this on a whim as I really didn’t need it as I have a slew of primer sticks already like Maybelline Facestudio Master Blur Stick Primer, E.L.F. Prep & Blur Stick, and Milani Instant Touch-Up Blur Stick. Some are cool, some are ok, some are just awful but the idea of a primer stick is not a new or unique one by any means and I really didn’t need another but there was a great sale when I purchased the stick. It was a BOGO and I actually ended up paying for two eyeshadow palettes and getting the primer stick for free so, hey, cool deal right? 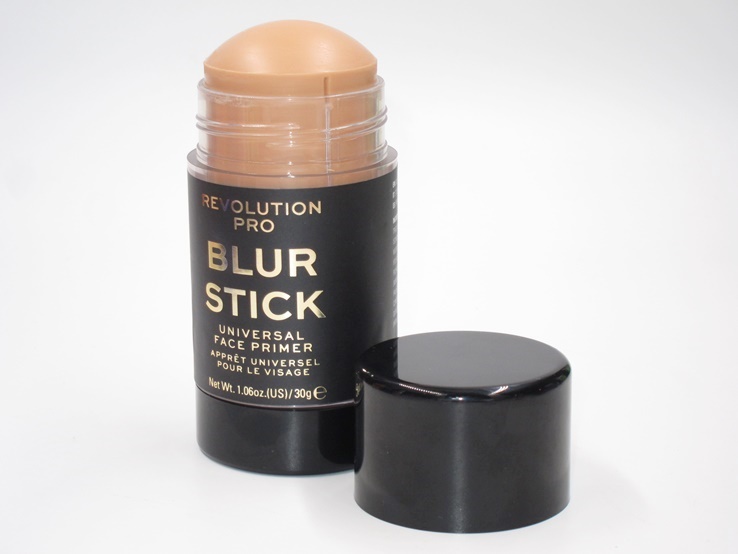 Revolution Pro Blur Stick arrives in a rather massive chubby swivel up barrel. It looks like more like a deodorant than a facial primer ha…! I actually like the bigger size as it covers so much more of my face in a few swipes compared to a smaller barrel.

This is a great pick if you’re a bit oily or have combination skin. I’m dry but at the moment I’m a lot more shiny and oily and it’s working out great for me. I probably wouldn’t use it in the Winter months though.

If you’re a bit of a germ-a-phobe this packaging might throw you off as it is a swipe and blend application. I did try using a brush with it but it doesn’t work all that great. I swipe down one side of my face, down the other, and I blend it with my finger tips. I do find it a bit gross swiping it across my face and replacing the cap after. Shrug. I guess sometimes you have to deal with these types of things in the “makeup stick” world.

It’s nude in color but does apply transparently. It’s very lightweight! After I apply and blend, it feels like I didn’t even put anything on my face at all. I do not have larger visible pores on my face but I do have smaller ones on my nose and this completely blurs them and creates a smooth finish. The surface of my skin is fairly smooth but after applying this it looks even smoother! It also makes my foundation look so much smooth and even. I wouldn’t say it extended the wear of my foundation though but it does make it look pretty amazing when used under it. It sort of gives this airbrushed look to my skin which I loved. It does curb some shine and oil but if you’re super oily you might not see that much mattification from it.

All in all, if you have smaller, visible pores this blurs them very well and creates a very smooth finish for makeup. I really liked it and I would recommend checking it out.

Revolution Pro Blur Stick is a great pick for anyone that wants smoother looking skin.