Unicorns, mermaids, and metallics make their way into your world with the new Tarte Make Believe In Yourself Eye & Cheek Palette ($40) that launched earlier last week for the Summer 2017 season. It’s a long time coming but finally we have somewhat of a rainbow hued palette from Tarte. They are obviously listening because many, many people have asked over and over again when Tarte would release a more colorful palette and that’s exactly what the Make Believe in Yourself Collection is all about! Color! Now, granted, this palette isn’t all about rainbow hues. Tarte still pops in a few natural shades as well which to be honest, I’m not in the least bit upset about as if nothing at all I love me a good nude, natural shade.

Let’s take a look at my review and swatches of the Tarte Make Believe In Yourself Eye & Cheek Palette!

Tarte Make Believe In Yourself Eye & Cheek Palette comes in a round compact much like past palettes we’ve seen in the past like the Rainforest of the Sea Palette, Rainforest After Dark Eye & Cheek Palette, and Amazonian Clay Blush Palette Color Wheel. It’s a packaging that’s slick, compact, lightweight, and travel-friendly. It has a generously sized mirror tucked inside and a pretty abstract design decorating the front. The palette is made in the USA. The palette contains 10 eyeshadows each of which is 0.038 oz each and one highlighter which is 0.105 oz. There’s a little more product in this palette compared to past palette and that’s reflected in the higher price which is $4 more than say the Rainforest of the Sea Palette which is $36 with few shades and less product. 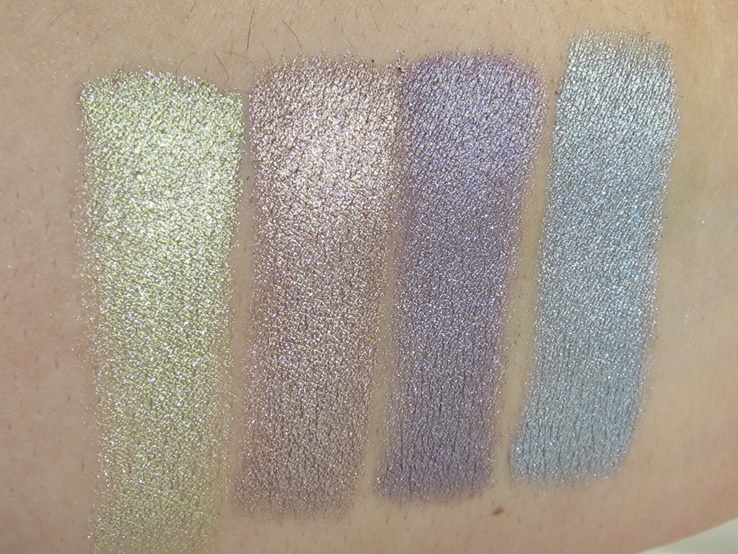 It may be packaged similarly to past palettes but the contents are quite different from the purple or nude, natural theme that Tarte so dearly loves to go with with their eye and face palettes. This palette contains a unique assortment of shades that range from warmer to cooler. I wouldn’t say it’s a rainbow of colors but it is different for Tarte and it could be exciting if you’re wanted to experience Tarte’s gel eyeshadow formula in shades other than brown. For me, the original Tarte Rainforest of the Sea Palette was all about browns and nudes, a year or so later along came the Tarte Rainforest of the Sea Volume II Palette and that was an assortment of smokier shades, and now we have the Make Believe in Yourself Eyeshadow Palette and this is more about injecting a little bit of color into your world. For me they played it safe with this release as they have a lot of fans that like their assortment of nudes and they made the Make Believe in Yourself Palette fun yet safe enough for those nude lovers that want to play with a little color but not a lot. They didn’t leave nudes completely behind as this palette does contain brown, copper, and peach shades. But along with warmer shades they have a pretty chartreuse, aqua, purple, and blue. So, yeah, this is a safer “rainbow” palette but as I said earlier it’s still a fun and different release for Tarte. Tarte is known for their softer, silkier eyeshadows but this palette has the same formula has the Tarte Rainforest of the Sea Palette which is much different from anything that Tarte currently makes. These shadows have a gel-like texture that’s creamy and smooth. I find the texture is a little bit of a hybrid with a powder cream-like consistency that glides easily onto eyes and blends smoothly. I typically use a sponge eyeshadow applicator for application as I can pack color on easier this way. If you’ve used Make Up For Ever’s newest Artist Eyeshadows this texture is similar but much softer. I actually thought the texture was even softer than the Rainforest of the Sea Palette eyeshadows but not flaky nor prone to fall out. The colors were very pigmented and quite smooth to the touch. The shadows have a foiled finish without any addition of water. Considering how hot metallic anything is at the moment in the makeup world these will perfect for on trend looks come Summer. There is, strangely enough, a single matte shade in the palette which was a little sheerer and dense than the other shades. It’s appearance was a little odd. And finally, for the highlighter fan girls and guys, there’s a Strobing Eye and Cheek Highlighter called Myth in this palette which is a shimmering pearl white. This had a softer, gel-like consistency as well. I preferred the shade as a high brow highlighter as on my face it wasn’t terribly flattering. The Tarte Make Believe In Yourself Eye & Cheek Palette isn’t exactly bringing a rainbow to your world but it does give you a taste of the rainbow. It playful, colorful, yet still gives you options for a nude look as well should that be more your style. I like the combination of bronze-y shades with the pops of aqua and green. You can definitely get that “unicorn” look that Tarte is going for with this collection but you can still keep your feet firming planted on the ground as well.

I liked it and think it is worth grabbing if you enjoyed the Rainforest of the Sea eyeshadow formula.

Tarte Make Believe in Yourself is available now at ulta.com, sephora.com, and tarte.com.
Did you purchase it?