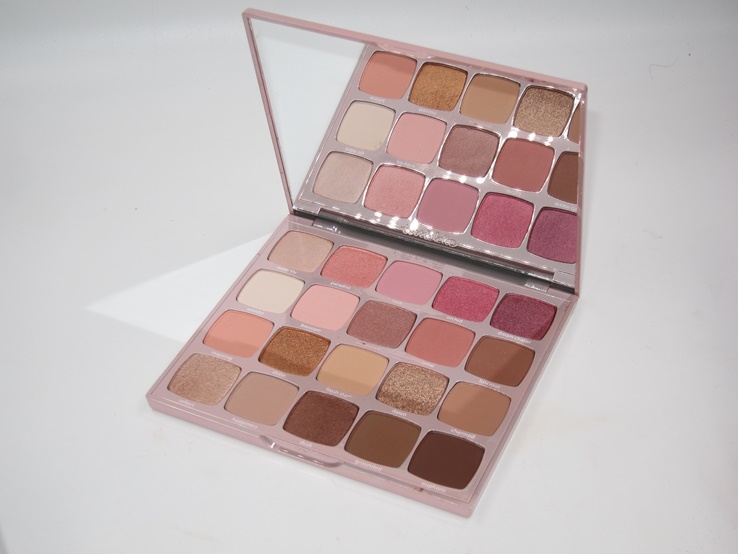 Tarte Tartelette Juicy Eyeshadow Palette is a new Amazonian Clay Eyeshadow Palette that launched for Spring 2021 which contains 20 pink, plum, and neutral shade selections. If you’re one that gets excited about promo pics this is visibly a treat for the eyes but like most promo pics it’s a bit inaccurate. I think the promo images make it look way more rosy (and a bit more plummy) than it actually is. In reality, it’s another nude, neutral eyeshadow palette because the palette is in fact dominated by a lot of brown. It’s a lot warmer than the promo images let on but does contain a good deal of cooler shades as well!

As you can see this is laid out a little differently compared to the Tarteist PRO REMIX Amazonian Clay Palette and Tarteist PRO Amazonian Clay Palette. All three palettes contain twenty shades but the Tartelette Juicy Eyeshadow Palette doesn’t have the four circle pan eyeshadows that the PRO and PRO Remix contain. If you’re all about a uninformed design this will delight you as I know those circle pans really bugged some people! When the PRO Palette launched it was $53 (now priced at $49) and contained a total of 0.70 oz of eyeshadow. This is a bit cheaper at $45 and contains a bit more product too as you get 0.80 oz of eyeshadow (0.04 oz per shade). More for less is always better right? Tarte Tartelette Juicy Eyeshadow Palette comes in a gorgeous pink compact. It’s probably one of my favorite packaging designs and reminds me a little of the Tarte Aspyn Ovard Eye & Cheek Palette. It’s just really a pretty pink and the dandelions blowing in the breeze decorating the front are quite a nice touch. It also has a huge mirror inside which I sometimes forget to mention but you gotta love that you can pop this open and sit at your desk or vanity and get your whole look down courtesy the overlarge mirror inside. Each of the eyeshadow pans are massive as well so plenty of room to move your brush around in them and yes, the names of each are printed below the shade. The palette does have a chocolate-y fragrance. 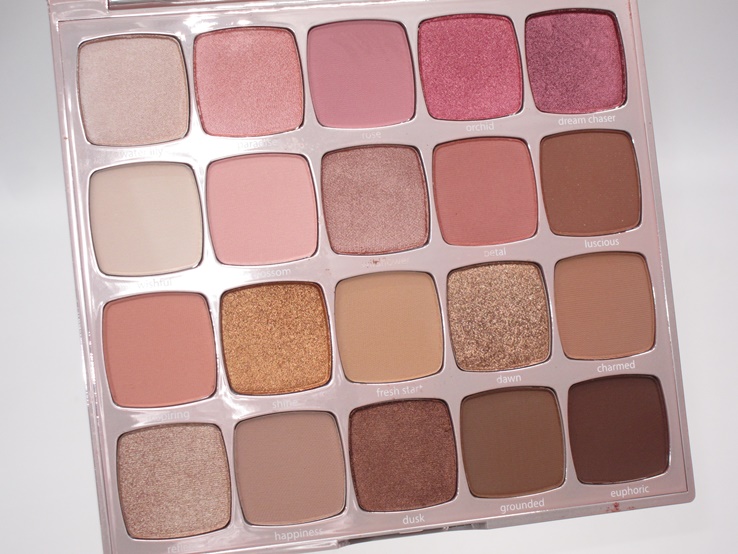 A few years ago I would have said hell no that the palette is mostly dominated by matte shades (10 to be exact) but nowadays I love that! There are also four pearlescent and six metallic finishes. This formula is new for Tarte. You can’t tell me this is their regular formula because the shadows are must firmer, they are a lot less powder, and a bit less silkier. This formula feels a bit drier and the application and blending wasn’t what I’m used to from Tarte. Sponge-tipped eyeshadow applicators help pile color on but I thought picking up color with a brush was a bit challenging. Oddly I liked the new firmer texture! I don’t really miss all that powdery kick up. I can see it being a disappointing formula though for those that expect something softer or silkier. I think the colors can go muddy and I noticed a lot of people blaming the formula but I don’t think the formula is the issue here. I think the shades are just too similar or some too light which causes problems with contrast. 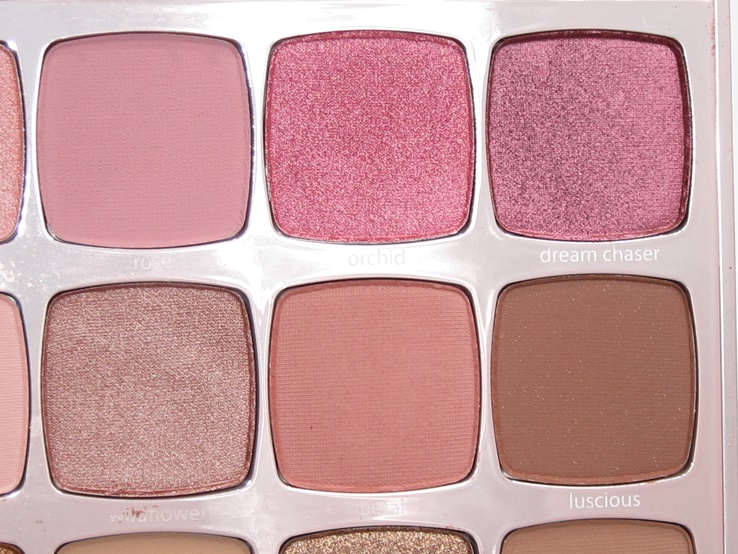 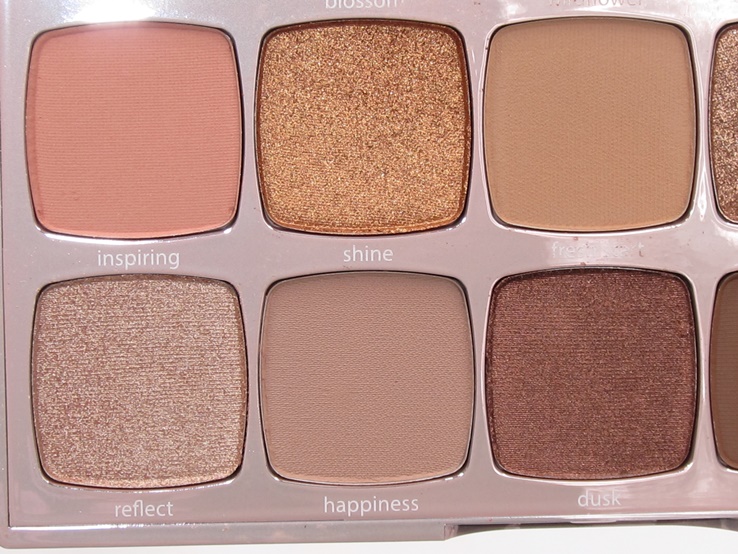 I’m going to say something that goes against the grain here but I actually like this palette. It’s not unique, the formula is a bit drier, there aren’t as many rosy shades as I thought there would be but it sort of reminds me of a Huda Beauty Palette. I feel like the densely packed shades give me more control over application as I tend to be heavy handed and with a denser formula I find I apply less and can blend better to get that airbrushed finish without a ton of excess eyeshadow all over the place. I also like the shade round up even though there aren’t a lot of pinks. Dusk is a particular favorite shade of mine and reminds me of a color that in a Tarte Holiday Palette from many, many years ago! It’s a really pretty plummy brown. I can’t deny I got some good looks from this palette!

Tarte Tartelette Juicy Eyeshadow Palette doesn’t bring a whole lot of new to the table but I can still see myself making use of these shades on the daily. It’s a really nice assortment of colors that work well together.

Did you buy it?

Tarte Tartelette Juicy Eyeshadow Palette is a new, permanent rosy, plum, neutral palette that contains twenty eyeshadows which are 0.04 oz each and priced at $45. This is a really gorgeous palette but the promise of pink and rose shades falls short as there aren’t as many as you would think compared to the promo images. None the less, it’s still a beautiful assortment of shades that work well together! I did find the formula a lot firmer and drier compared to past Tarte palettes with a lot less of the silkier and looser, powdery formula we’ve seen in the past! Picking up color was a little challenging with a brush but I was able to pack color on easily with a sponge tipped eyeshadow brush. Blending was a bit challenging as well because some shades are lighter or too similar resulting in muddy blending or blending without contrast. Despite the flaws I still liked the looks I was able to create with this palette and see it as one I will reach for daily!

Tarte Tartelette Juicy Eyeshadow Palette should be appealing to those that like nude eyeshadow shades with pops of rose and pink!